Tidal Lagoon Response: 'a sad day, but not the end of the journey' 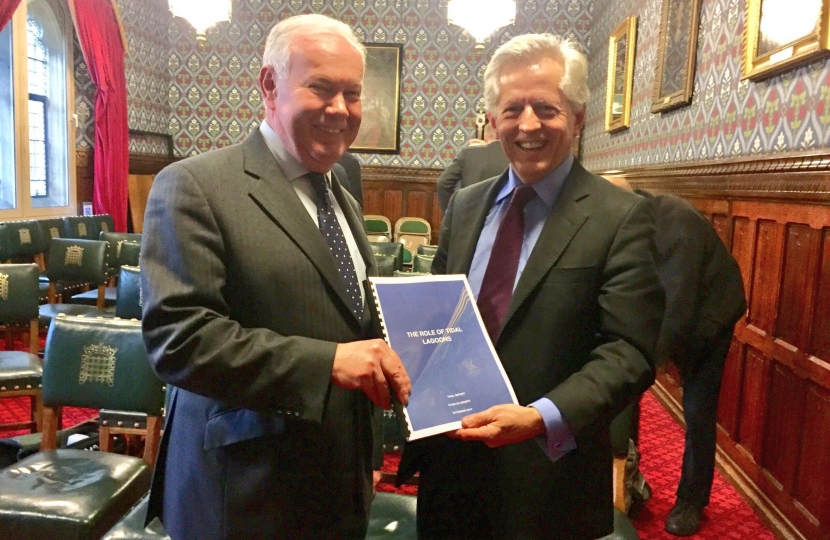 Richard Graham MP says the government’s decision on the Swansea Bay Tidal Lagoon ‘is a sad day, but not the end of the journey’

MP for Gloucester and Chair of the All Party Parliamentary Group on Marine Energy & Tidal Lagoons, Richard Graham MP, has said the Government’s decision to not go ahead with the proposed Swansea Bay pilot project needs further explanation and debate. “We need a proper response from the government to the Hendry Review that recommended the project – including a detailed breakdown of all its financial assumptions. This is not the end of the journey.”

Richard said, “It is clearly a sad day for Swansea, for Gloucester as the home of Tidal Lagoon Power plc, and the wider marine energy sector. The reasons for the government decision, in one word, is money. But the discrepancies between Charles Hendry's strategic financial analysis in his Review on the role of Tidal Lagoons and the figures used by the Secretary of State are huge. When the government says the cost will be £700 per household energy bill that’s over a very long period. The actual cost per year per household is 30p. That is a fraction of the £18 billion subsidies that offshore wind has enjoyed or the cost of the new nuclear energy from Hinkley Point.”

Gloucester’s MP said “the government cannot say at what price it would have approved the deal. Where there's a moving target on price, and the only customer is the government, how can a new business create a new type of energy? And while it’s great news that offshore wind has been awarded contracts at a price much lower than nuclear or tidal we cannot survive off wind alone.”

Richard Graham called for complete transparency of the government’s financial models, and a full response to the Hendry Review, eighteen months after it was published. “The government needs to spell out its strategic approach to marine energy, and how investors are going to be stimulated after this rejection of a strong recommendation by a respected former Energy Minister. Do they want marine energy and if so how are they going to get it? What are we going to do to take advantage of one of our strongest resources?”

Gloucester’s MP added that inevitably some people were trying to score political points on green energy, but they were wide of the mark. “This government’s green credentials and the amount of energy generated by renewable sources are the best yet, with over 50% of our energy generated from low carbon sources at one point last year. But there is a very specific question about price and value for tidal energy that needs to be resolved. This announcement is only the start of that debate. I intend to continue making the case, and at some point I am convinced the government will need to have greater diversity of energy security and will turn to marine energy. Right now let’s have the facts on the table and examine them critically in a debate. I know that is what Charles Hendry also wants to see.”

When Richard called for further debate in the House of Commons he quoted the Hendry Review: “when the wind turbines and solar panels have long since been decommissioned in a few decades time, tidal lagoons will still be capable of delivering some of the cheapest lowest carbon power available.” The video of Richard’s comments is available here: https://www.facebook.com/richard4gloucester/videos/1222569391213148/