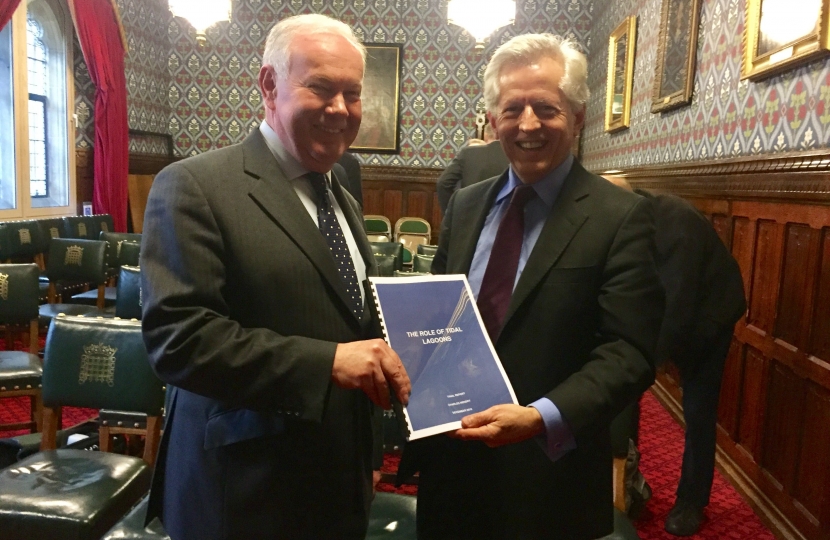 Chair of the All Party Parliamentary Group for Marine Energy and Tidal Lagoons and Gloucester MP Richard Graham said that the Hendry Review of Tidal Lagoons gave the clearest possible recommendation for the government to move fast and develop this new global industry.

Richard said, “Charles Hendry said he had started a sceptic and ended a huge enthusiast for the opportunities in this sector. On the core issues of security of supply, decarbonisation, affordability and economic gain (jobs above all) his Review found strongly in favour of the UK being the world’s first mover of Tidal Lagoons – and he urged the government to get negotiations for a Swansea pathfinder moving as soon as possible, with an aim of seeing electricity generated from the Swansea Tidal Lagoon in 2022.”

The Hendry Review noted the huge public support for Tidal Lagoons, the importance of UK manufacturing, supply chains and tourism, and made over 30 recommendations, including the creation of new delivery body (Tidal Power Authority).

“This report gives the government the opportunity to move forward on domestically sourced, very low carbon generation from our greatest untapped source of energy – our tides. I will be inviting members of our All Party Group to write a further letter to the Chancellor giving our support for the recommendations and urging him to make a positive response before the Budget,” said Richard

Mark Shorrock, the Chief Executive of Tidal Lagoon Power said, “the Hendry Review has set the final piece of the jigsaw in place and we look forward to working with Ministers and Officials to bring this new industry to life. We really appreciate the work done by Richard and APPG members in putting tidal lagoons at the centre of Parliamentary debate.”

Charles Hendry said, “it is clear that tidal lagoons at scale could deliver low carbon power in a way that is very competitive with other low carbon sources. We are blessed with some of the best resources in the world, which puts us in a unique position to be world leaders. The costs of a pathfinder project would be about 30p per household per year over the first 30 years.”