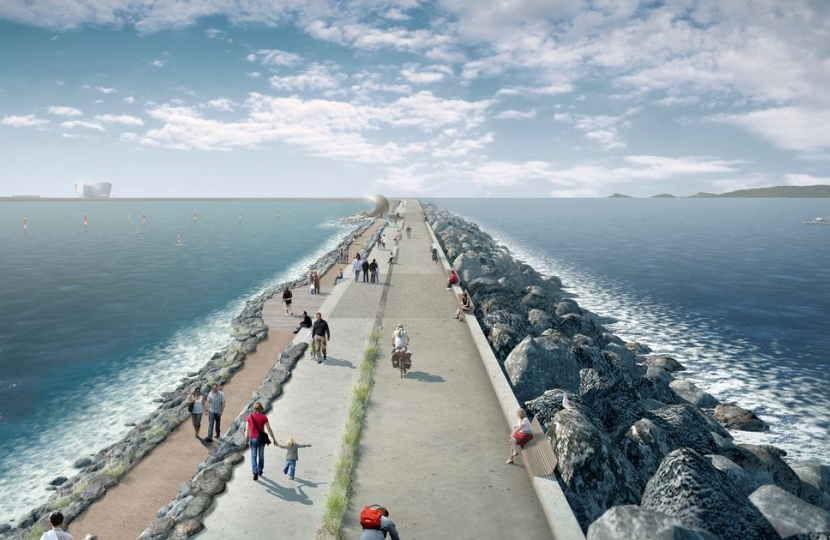 It may not hit the headlines when the media are focused on whether the Kremlin has compromising material on the new US President, but yesterday was I think the moment Britain got serious about creating a new global industry.

We were early movers in offshore wind energy, and we have an opportunity now to be the first mover in generating energy from tidal lagoons. There are tidal barrages in eg France and Russia, but no tidal lagoon – where a large wall is built around a bay, and an under water turbine captures energy from the twice daily movements of the tide – anywhere in the world. Yet.

Some time ago I opened the Gloucester headquarters of Tidal Lagoon Power plc (TLP), which proposes a series of tidal lagoons to harness the strength of the Severn Estuary tides and generate up to 10% of Britain’s total electricity needs. The technology is not totally new, but has never been deployed in this way before: and the size of even the first and smallest lagoon in Swansea Bay involves over eleven miles of wall. And although TLP has funding for the c£1.3 billion project, ultimately the taxpayer would subsidise the cost through the price paid by the National Grid.

In the wake of controversy about the size of the subsidy to be paid for nuclear energy from the new Hinkley Point stations, the government was cautious about the cost and last year commissioned a Review of Tidal Energy. Those who thought the aim was delay, prevarication and kicking the issue into the long grass will have been disappointed by Charles Hendry’s report, whose launch I hosted (as Chair of the All Party Parliamentary Group for Marine Energy & Tidal Lagoons) in Parliament yesterday.

Charles is a former colleague and Energy Minister, and although he started a sceptic hisreport  is absolutely clear about the scale of the opportunity and its importance to the UK. He described our tides as the greatest untapped source of energy in the country, and highlighted the Severn Estuary and the Solway Firth in particular. He sees a golden opportunity for Britain to be bold and seize first mover advantage in a new global industry, and in his 40 recommendations urges the government to reach agreement on a pathfinder by TLP at Swansea Bay as soon as possible. Why did he reach that conclusion?

The Hendry Review looked at four key questions – the security of supply, decarbonisation, affordability and economic gain (jobs). On all four it found strongly in favour of tidal lagoons. Their energy is domestically sourced and predictable, very low carbon (and supported by Greenpeace). The estimated UK content is 65%, with 50% likely to be sourced from Wales – not least manufacturing (including steel) and construction, but with huge tourism potential which Charles Hendry thought had been much underestimated, and compared to the Eden Project in Cornwall. And then there is the cost.

The report estimates that the cost of the Swansea pathfinder would be cheaper (through the Contract for Difference or CfD structure) than the nuclear subsidy, and over the lifetime of a tidal lagoon considerably cheaper per megawatt hour than offshore wind: less than 50p per household per year over the the first 60 years (after which the subsidy would end).

The Hendry Report makes 40 recommendations, many to government: including the creation of a Tidal Power Authority and establishing competitive tenders for future lagoons. The government will now study these in detail. So what happens next?

Last autumn I wrote a letter to the Chancellor urging him to look seriously at the Review when it came out because the 111 MPs who signed my letter all believed there were significant opportunities for Britain. As the Hendry Review has confirmed our instincts I will now write again, urging a detailed and formal response before the Budget.

In my view it would simply not be credible for the government to ignore or reject the general thrust of the recommendations. The Review and its author are too authoritative. It will have to look closely particularly at the structure and pricing issues, but the risk of the pathfinder at Swansea is really with TLP plc – they won’t receive anything until the electricity is in the National Grid, probably in 2022. And the support they have in Swansea, Wales and much more widely for this project is almost unprecedented.

I am also sure that an opportunity to buy tidal bonds with an income stream as steady as the energy itself would be well subscribed by both pension funds and retail investors alike. I want to see Britain investing in and owning our own infrastructure and this is our chance to show that we can and will do so. So much of our infrastructure from Camelot to most of Heathrow Airport is not owned by us – but it doesn’t need to be that way.

Which brings us back to Gloucester. What could be more exciting than to have a business based in our city construct the first of what I hope will be many tidal lagoons, all over the world. Our city has thrived on manufacturing innovation – whether Booth’s first vacuum cleaner, to the first flight of Whittle’s jet engine, Dowty’s landing gear and aviation instruments and the nuclear industry whose operations are all still run from Barnwood. Creating the world’s first tidal lagoon is in a great tradition – and I will do all I can to keep encouraging this bold step forward for Britain.

Let me know your thoughts and reactions on richard.graham.mp@parliament.uk