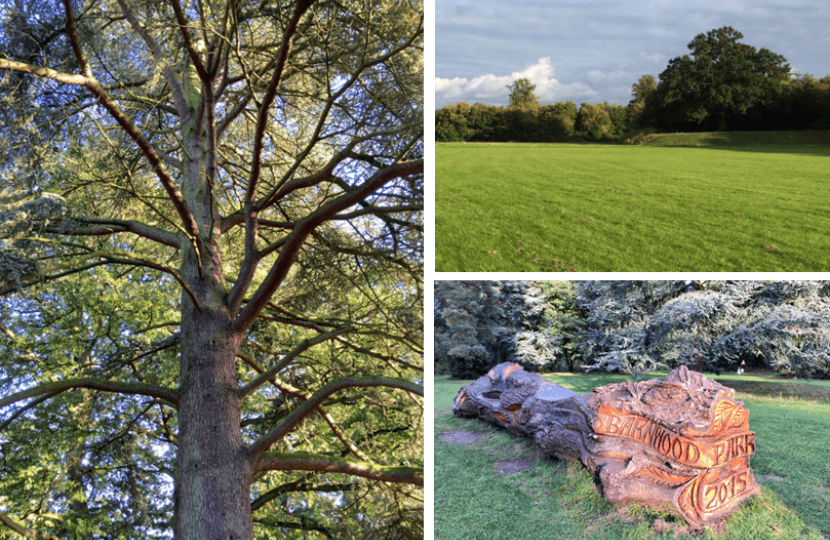 Everyone wants me to write about the latest twist in our Brexit saga, and I will – but first I want to ask you to do something even more unusual than voting for or against the EU: to vote for a Park.

One of the joys of Britain is that every town and city has a park: and some are very handsome. But we have one uniquely special. In fact it doesn’t really fit the urban model at all.

This Park has a gracious collection, especially of hardwood, trees beside a gentle duck filled brook and its own arboretum, where fabulous new and old trees are nurtured. There are wild spaces sometimes grazed by sheep: a miniature Gothic former chapel, now a temple to the body (or gym): a great water meadow stuffed with buttercups at the right time of year; and lovely views towards St Lawrence’s church that no-one could imagine are part of a cityscape.

‘In the Cotswolds’, pronounce friends confidently when I show them photographs from this haven and invite them to guess where they were taken.

But I am of course extolling Barnwood Park & Arboretum, Gloucester, in the last century once a private preserve, then part of a mental hospital (where poet Ivor Gurney amongst others was incarcerated), and for a generation now a people’s park.

Barnwood Park is yet another little known secret of our great city, close to Ermin Street (Hucclecote Road), the Roman road that still links Glevum (Gloucester) and Corinium (Cirencester) – and not really signposted at all. Park by St Lawrence’s, cross the road and walk 100 yards to your left and you’re there.

Today the park is tended by the council and a small army of dedicated and fiercely protective volunteers and we have the chance to give it (and them) deserved recognition. It’s been nominated for an award in the Best Park in the UK competition.

Normally when I get involved in awards it’s to support them for individuals, buildings or charities. And if I’m seeking a vote it’s in a General Election. This is the first time I’ve appealed to you to vote for a Park, which might result in an award.

Apart from this candidate’s great qualities, she won’t make any promises, won’t cause any scandals and will still be here in a hundred years, giving us all pleasure from her nature in a still troubled world. I rest my case.

So please join me and vote for Barnwood Park & Arboretum before Wednesday the 9th November here: http://www.fieldsintrust.org/bestpark/southwest.