What’s happening in our City Centre?

I was walking round the City Centre when a resident said to me: “everything’s closing in The Gates isn’t it..”

So that set me thinking about what has changed and is changing, and how much residents know about it.

I asked if he’d been to the (mostly free) bookshop at the top of Eastgate St, close to Waterstone’s, beautifully laid out by Julie & Moira (see photos) and great for browsing. He hadn’t, although it opened last autumn. 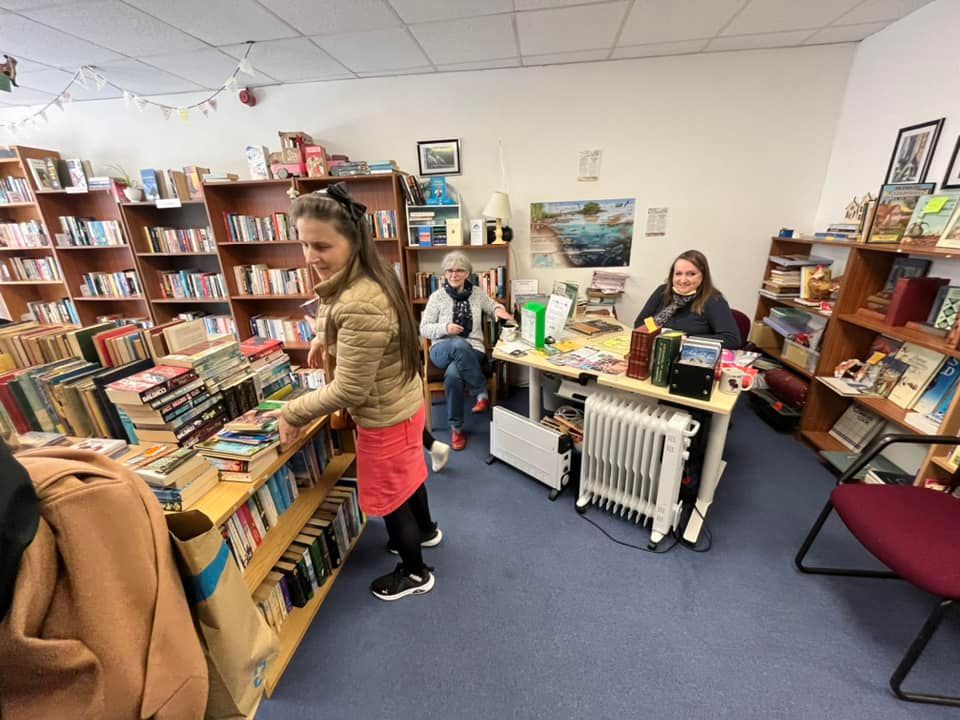 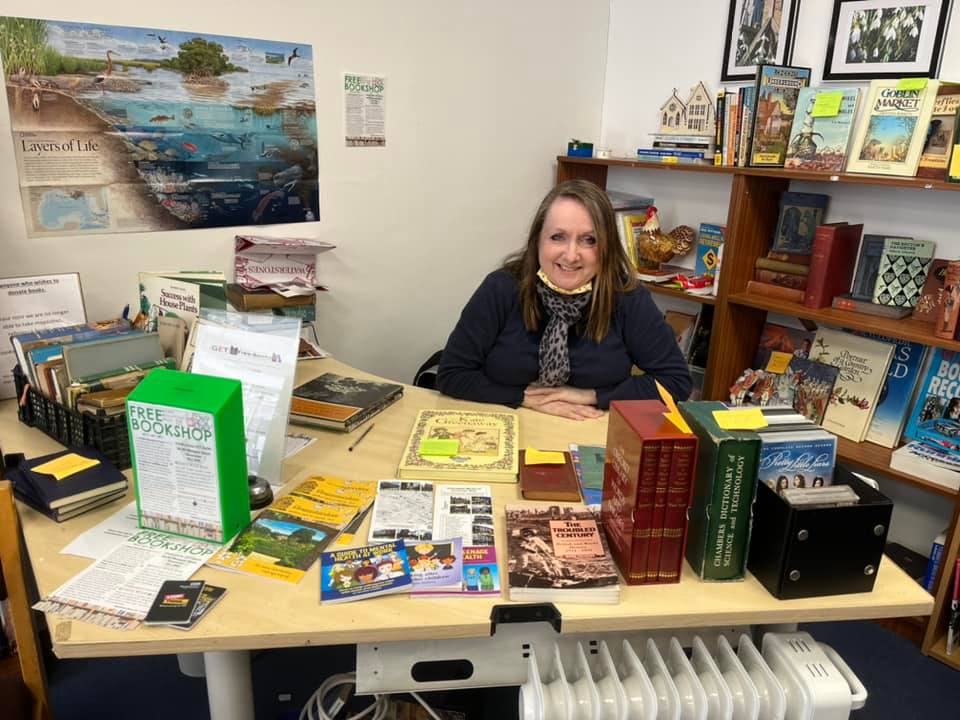 I asked if he knew Gloucester’s first Vietnamese Restaurant had opened in Westgate St (‘Viet Yummy’ - see photo). He didn’t, but added “the shop windows here are all dull aren’t they?” 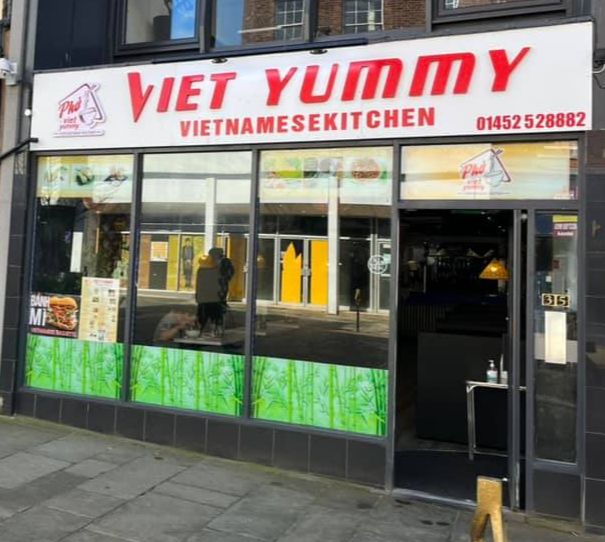 Our first Vietnamese Restaurant, in Westgate St - worth the detour

I thought of the shop front of the Candle Tree in College St and its competitor neighbour or (on Northgate St) Longfield Hospice’s window, brilliantly decked out in blue & yellow, colours of Ukraine’s flag (see photo). He hadn’t spotted any of these. 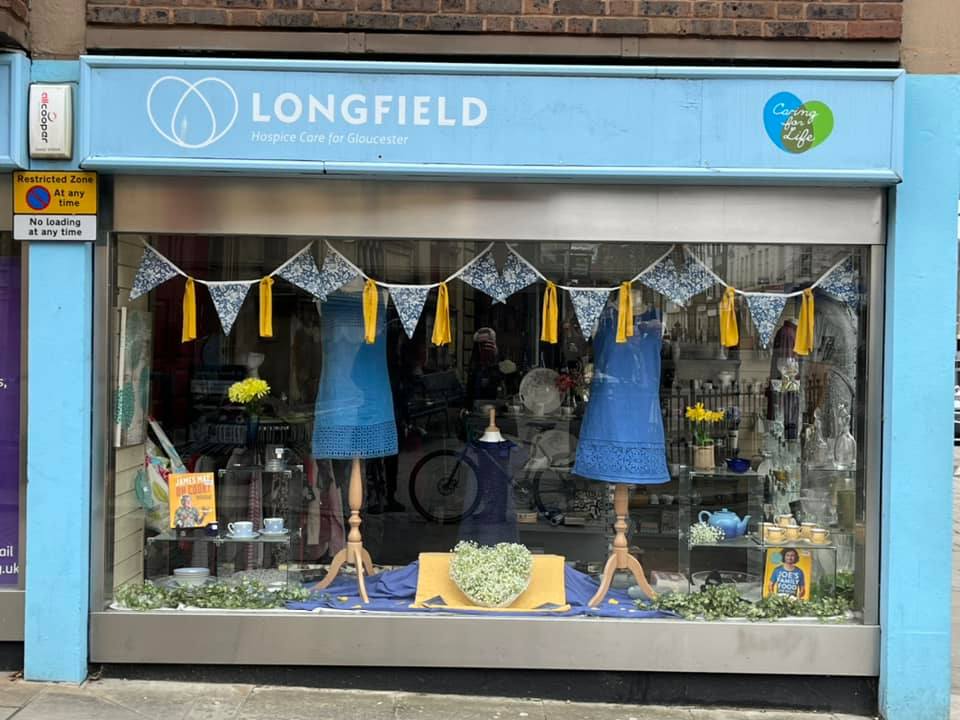 The Longfield Hospice shop in Northgate St: for me the Winner of an imaginary competition - Best Ukrainian themed and dressed shop window in Gloucester

How about the new Kings Square, I asked, been there yet? “It’s all under wraps isn’t it”, he replied, “has been for ages”. Not now. Almost all open and looking great.

He said “it’s a shame though isn’t it, Debenhams being turned into student flats.”

I explained it wasn’t - that he was looking at what would be the first redundant department store in Britain to become a University teaching campus (UoG City Campus), with up to 5,000 students and 300 staff right here in Kings Sq - with a much better facade on the square (see photo), a Library and Wellbeing Centre and a big cafe open onto the square. 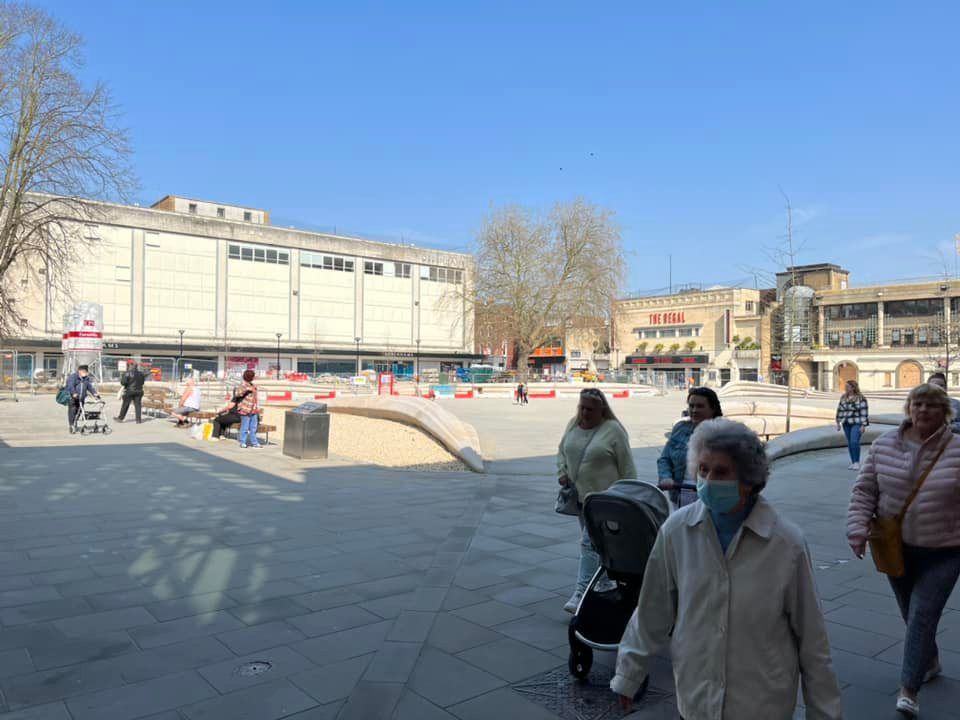 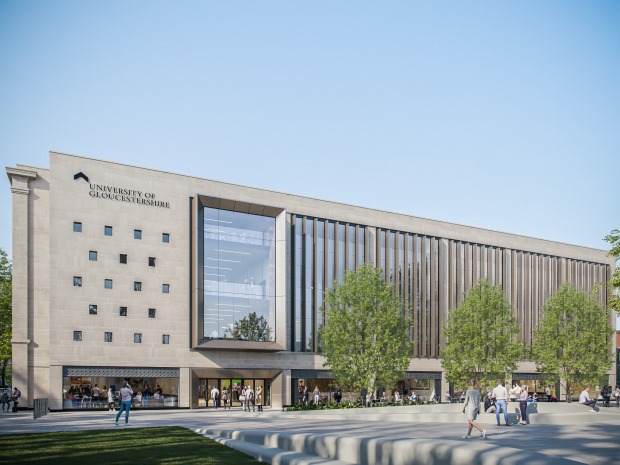 Other cities are dead envious of this depth of regeneration (with a huge knock on impact on retail).

He grunted “that sounds good but I’ll believe it when I see it”. (The City Campus opens Sep 2023).

Meanwhile (he added, turning round and looking for something else to criticise) “what about that empty building beside the bus station - when are you going to do something about that then?”

I ran through the first phase of Reef / City Council regeneration - the new housing and space to house Tesco’s, which would then relocate from Grosvenor House - at which point that empty building would be empty: and then pulled down. (“That’s better”, he said nodding)

Which would pave the way for Phase 2 on the old bus station (where a mini Roman statue of Venus was found, rumoured to be modelled on Pam Tracey), a new hotel and The Forge for tech and cyber businesses. 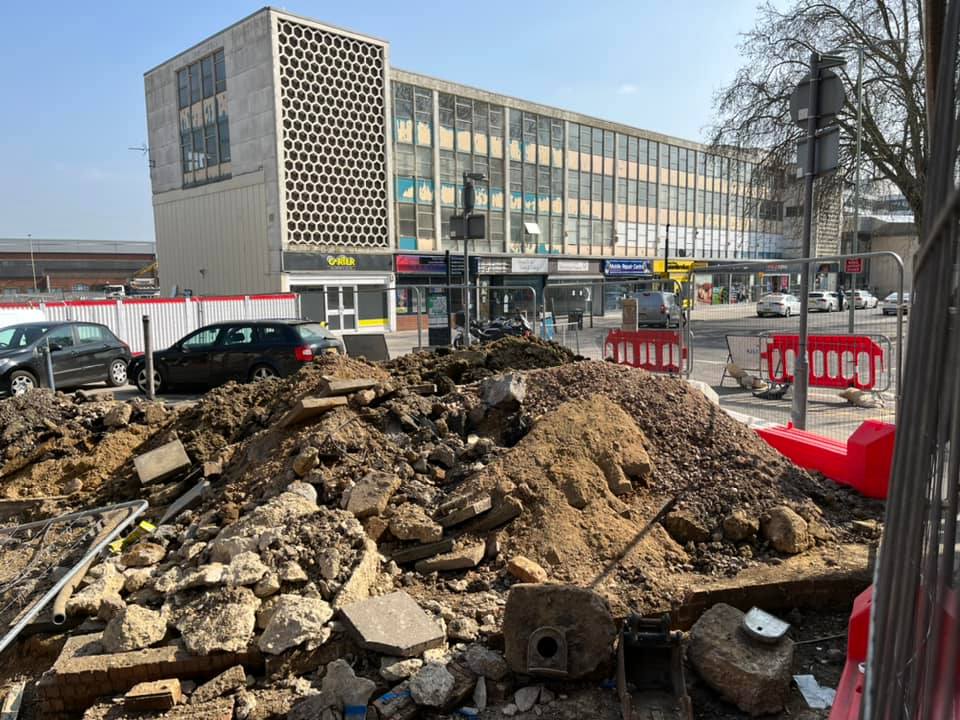 Grosvenor House: once Tesco moves the wreckers move in. By the end of this year, I hope

“But there’s nothing much to do here is there”, my constituent reflected, looking around.

Well, I answered, it all depends on what you like doing. There’s the award winning Music Works beside Wetherspoons, for the young to make and record music: and wait for their outside gigs to get going in Kings Sq, where people are already using the new curved spaces, and The Jolt beside it, for artists in different media. The Square will have a great vibe.

For shoppers you’ve got a great veg outlet in Kings Sq, a rare fishmonger & butcher in Eastgate Market, the big new Primark on Eastgate St and some fab niche shops (including music) in Aldates St - with the relocated Turks Head pub opening there soon. (When was the last time St Aldates had a pub? Phil Moss should know..) 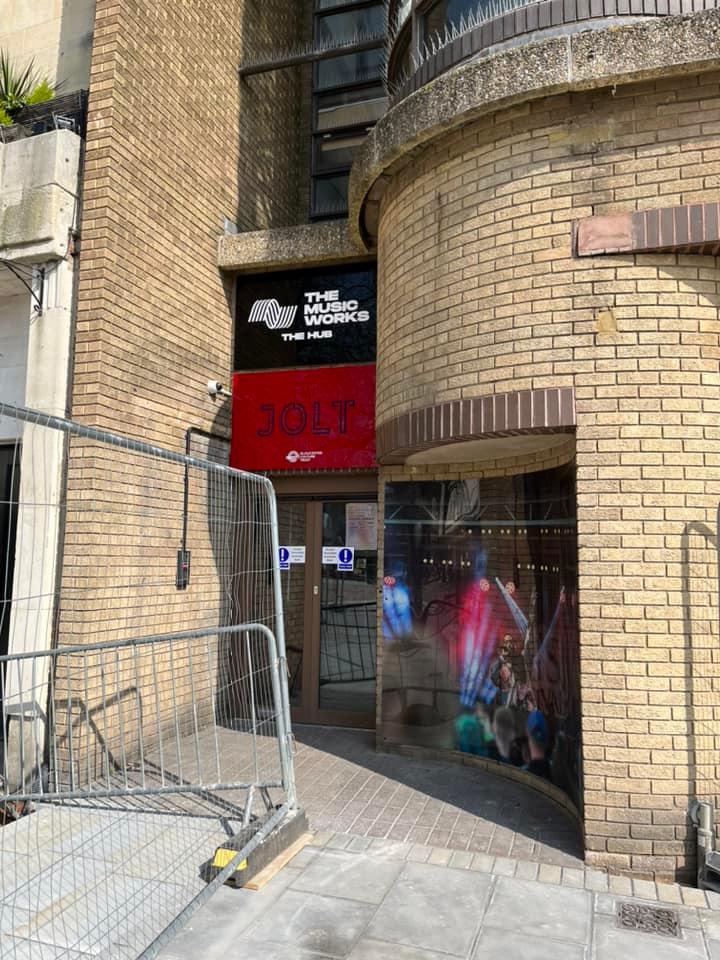 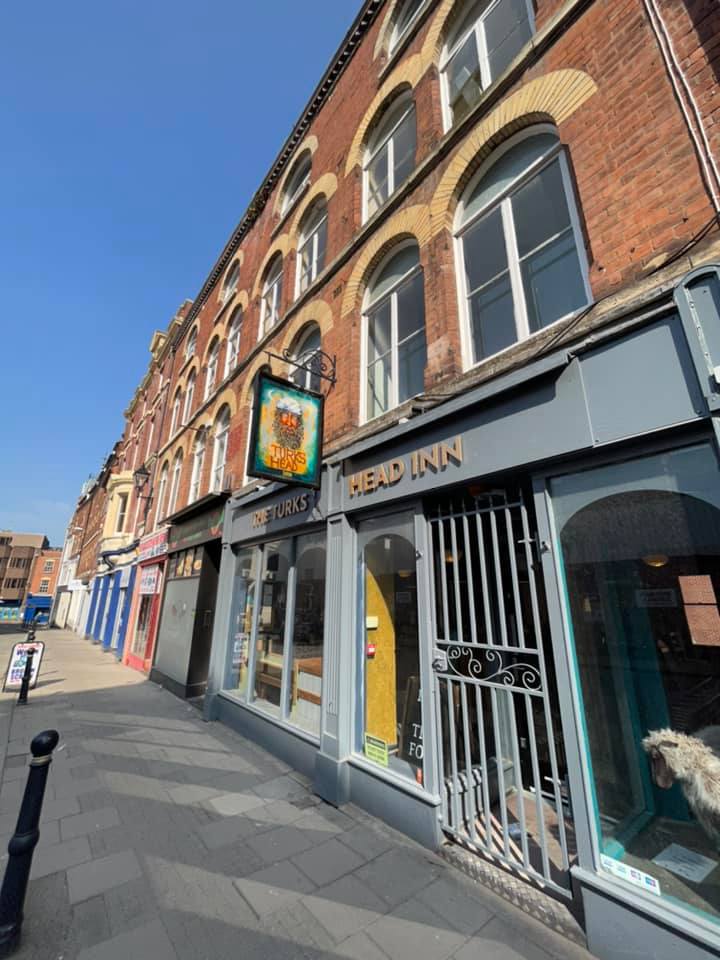 Round the corner is the Northgate Deli, best of its kind. You can get a slice of Mrs Smart’s Single Gloucester cheese here, cut from a whole ‘rolling’ cheese that might have been chased down Cooper’s Hill.

And then there’s a global photography exhibition in our Museum, 250 yards from the other side of Kings Sq along the line of our Roman Wall. “There’s never anything new there”, he grumbled: but of course there is and this exhibition is great.

With last week’s win of over £300,000 from the government, and the Arts Council having us as top priority in the SW of England, our Museum will go on looking better & hosting more innovative exhibitions..

Anything else? On Westgate St the new Cathedral Quarter office has produced a guide to The City Centre showing how much variety we already have here (and part of that is from them - see the photo of the recent Windows in Time exhibition). 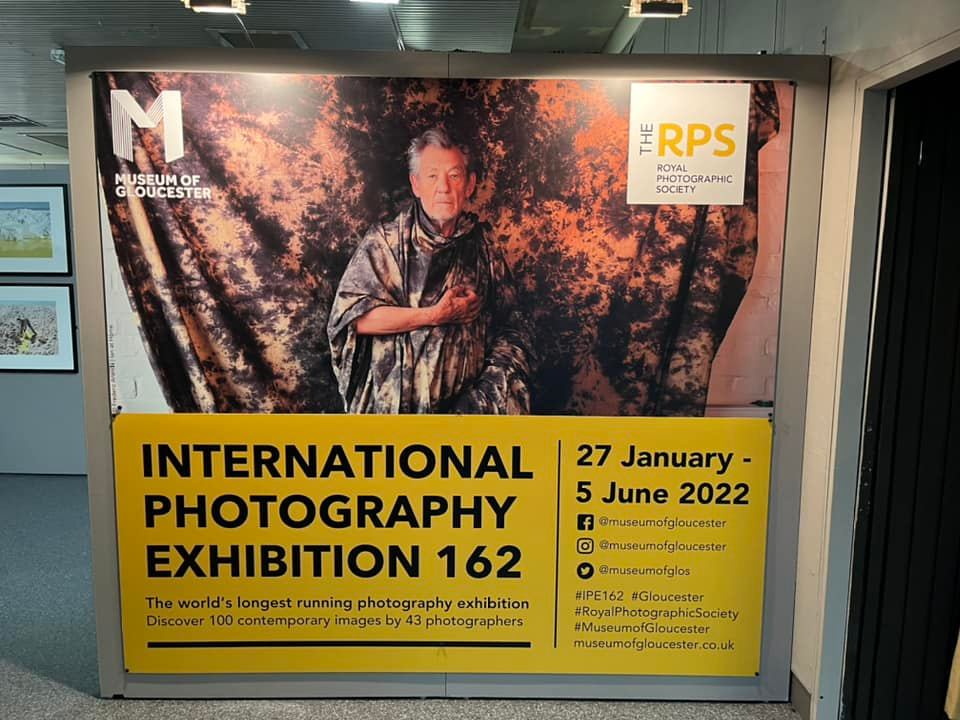 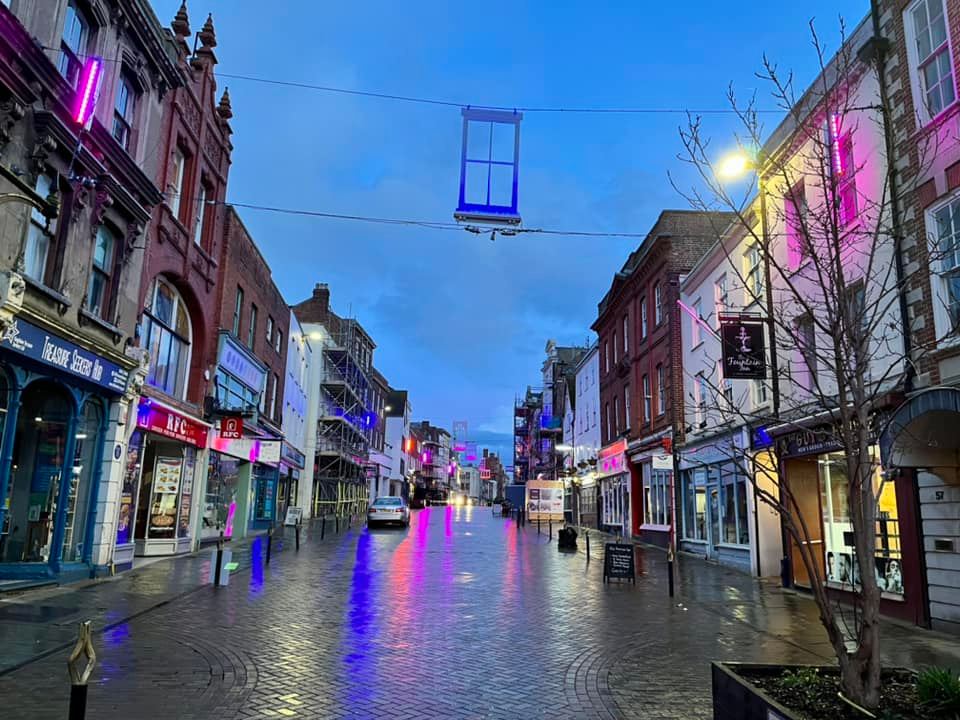 Left: Who’s this famous actor, and what’s he up to? See him and many more at the International Photography Exhibition at our Museum
Right: ‘A Window in Time’ exhibition by the Cathedral Quarter - they always say to understand the story of a street look up. Nowhere more true than Westgate St

There is indeed. We all know there are some empty shops and improvements needed on buildings, which is why the Heritage Action Zone has got plans for several.

But there's also much going on behind the scenes. Look at these uncovered beams (photo) that I was shown recently - they’re in fact the original outside facade on Westgate St, before the street narrowed after the Civil War - now inside the (later) facade of The Fleece buildings facing Westgate. The potential for a new boutique hotel there gets better every week.

As a result of bringing a hotel group up to Gloucester recently, and good work by the Council & Reef, we have interest in two possibly three 4 star hotels in Gloucester. It all takes time, but this is more progress than ever before. 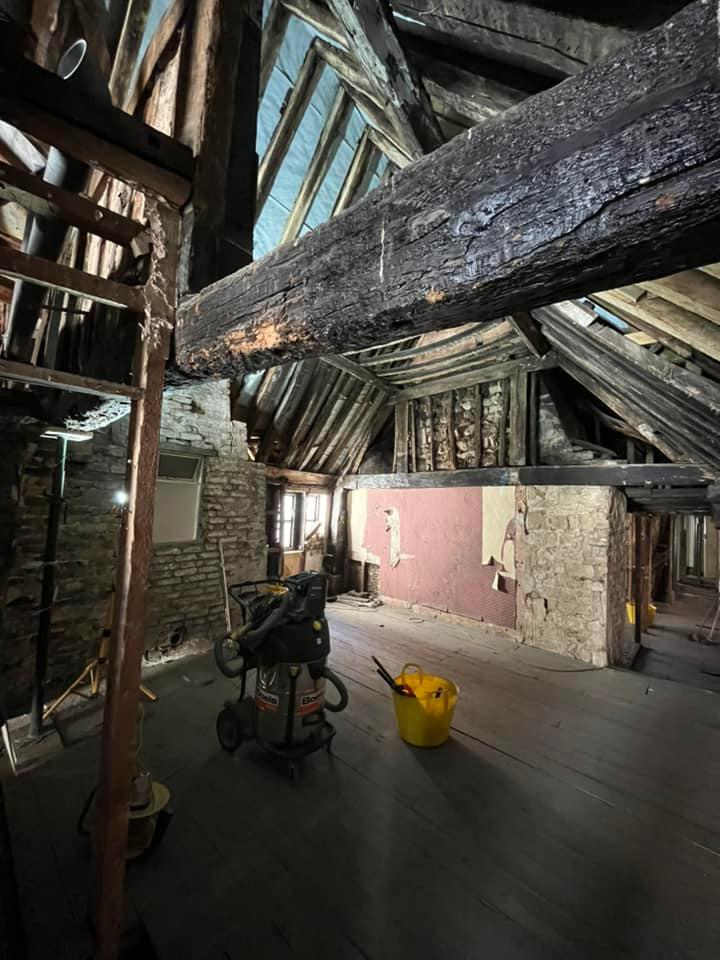 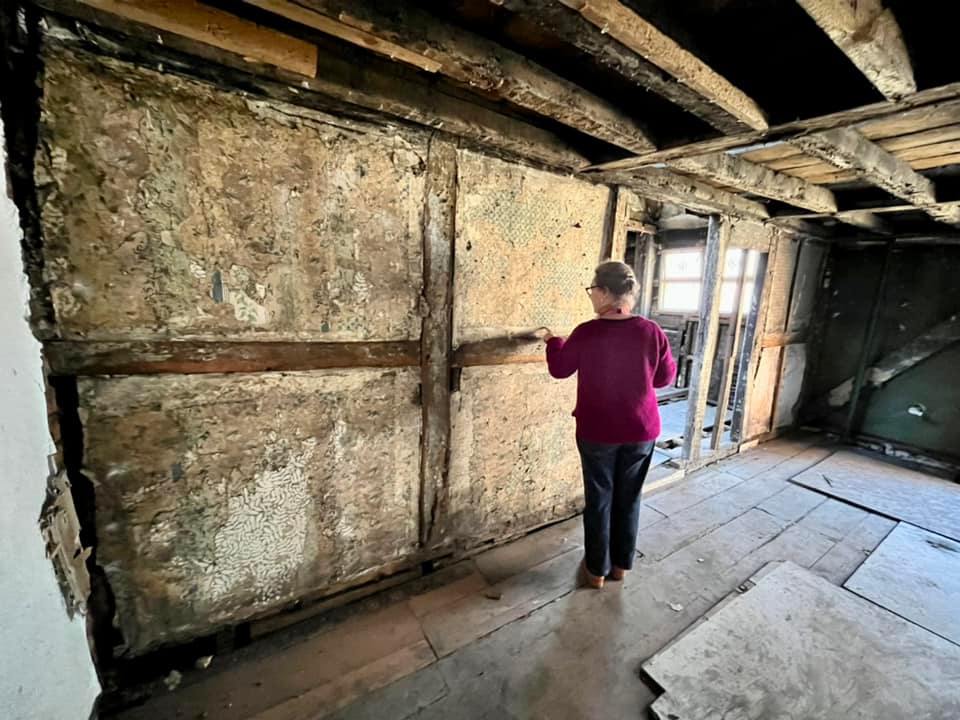 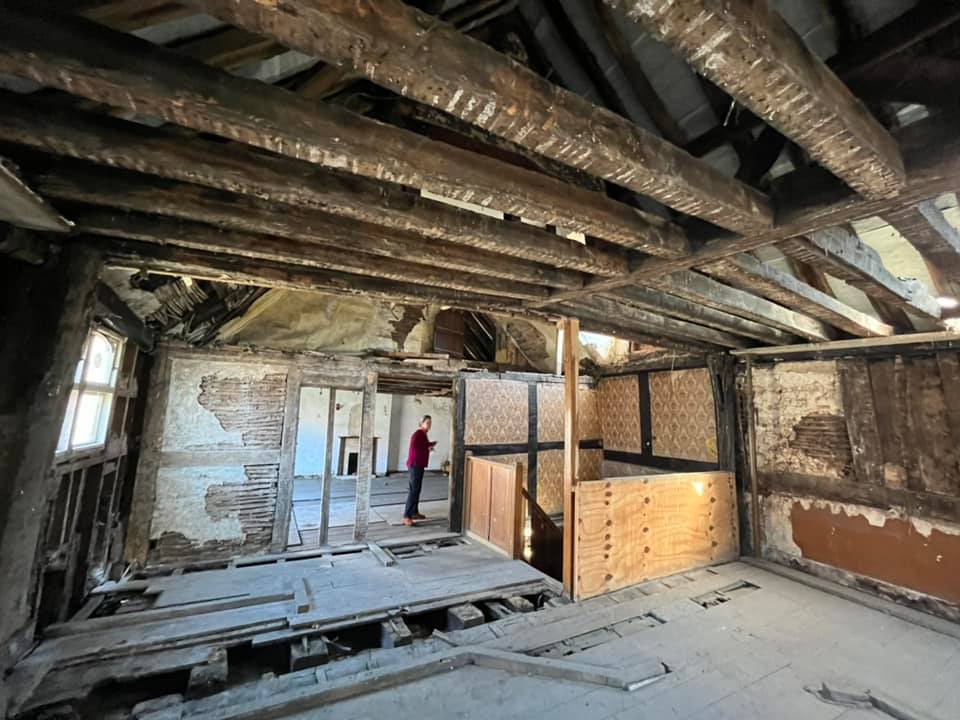 Top: Inside the Fleece: unpeeling the layers of centuries reveals this once outside beam in Westgate St before the street was narrowed in the 17thC
Bottom left: Conservation planning officer Kate looking at late 18thC block wallpaper
Bottom right: The different spaces inside The Fleece may look daunting to a hotelier - but the interior of the Tudor Farmhouse at Llanthony Secunda show what can be done

I showed some of the inside of The Fleece photos on my phone to my new friend. “Now if you can get The Fleece sorted” he said “ then we’re talking..”

We will - with the help of the City Centre Levelling Up Fund. That’s on top of additional student housing in Blackfriars (see photo), the new Food Docks opening this summer opposite Blackfriars, the one year old Quayside Health Centre, now with a pharmacy, and talks on the ex prison. 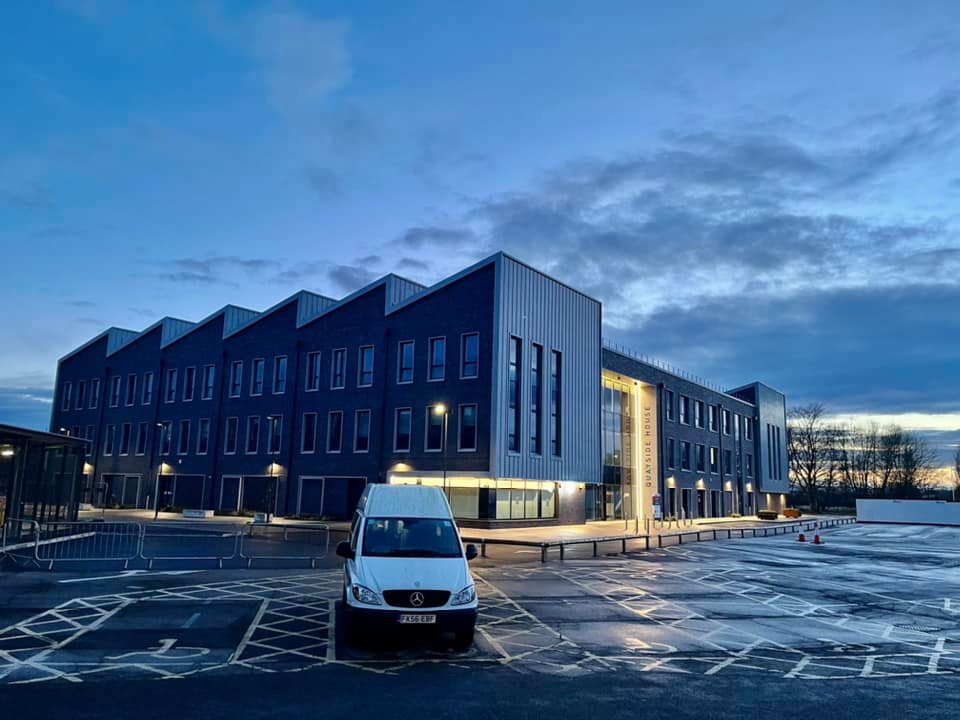 Add to that the new car park at the Railway Stn and further work on the exit to Bruton Way, the forecourt, facade, solar panels and under pass - not to mention our expression of interest to host Great British Railways here beside the station and there’s lots happening in our City Centre.

I’ve hardly touched on The Forum and what's going to be launched there soon..meanwhile get the guide from the Cathedral Quarter (or look online here: https://www.cathedralquartergloucester.uk/

What this really shows is that I and we have to keep communicating so that residents do know what’s happening.

We need more hoardings to explain too - both at the ex Debenhams and at the widening of the A38 road at Llanthony, which will make a huge difference to traffic there (not least for Hempsted residents).

PS: if you ever have any queries or thoughts do send them by e mail to me (richard.graham.mp@parliament.uk)