This e newsletter is funded by taxpayers – and it's primarily a source of information, reflection and analysis on key community issues.

Recent examples have been on help available for Mental Health, volunteering champions during the pandemic, new ownership at specs manufacturer Norvilles, an update on Regeneration and the golden era of cycling.

But equally important is holding organisations to account and asking questions on behalf of Gloucester. This e letter is about the Curious Case of the Police and Crime Commissioner and an announcement from the government about a £22m Safer Streets Fund to Constabularies around the country.

It came shortly after constituent mails to me about anti-social behaviour and street drinking/addiction in Kingsholm, and other recent correspondence about street alleys, fly tipping and violence in Barton & Tredworth and Westgate. So I looked to see what Gloucestershire had been awarded. 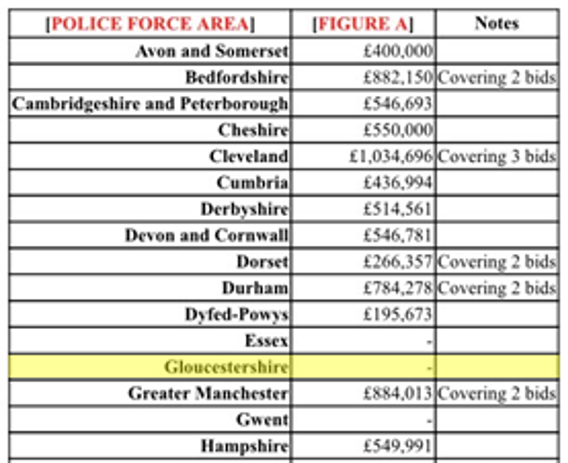 However the breakdown (see top of table above) showed zero for Gloucestershire. So I messaged the Policing Minister to find out why our bid wasn’t successful. He replied simply: there was no bid from Gloucestershire. So I tweeted to ask our elected Police and Crime Commissioner (Martin Surl) ‘what happened?’.

The Deputy PCC (whose role seems to include managing communications and media for the PCC), replied with a 7 page letter highlighting crime statistics to show Gloucestershire is the third safest county in the country and argued that the crime rates were (as the OPCC facebooked) 'too low to have been successful in a funding bid'

But 36 out of 43 police forces in England and Wales bid for the Safer Streets Fund. If the PCC case is that the county has good overall crime statistics and so no chance of bidding success, then how come police forces from areas safer than Gloucestershire (like Devon and Cornwall, the safest in the country) did succeed?

In fact the guidelines spell out that the process was "designed to maximise PCCs’ opportunity to be successful for at least one bid": ie every bid was expected to succeed. Why?

Because the bidding document spelt out that the Fund is not for the county as a whole but for local hotspots: "PCCs should choose a population size... to make a significant impact on acquisitive crime... (in) areas... between 500 and 3,500 households (or 1,000 to 9,000 residents)."  Read the full guidance.

Which means the PCC has to argue that we have no pockets of crime in any ward in the whole of Gloucestershire worthy of a bid.

This cannot be right. From my own experience of living in and having an office in the city centre for the last 13 years I know we would benefit from additional cash to improve safety in wards like Barton and Tredworth, Westgate and Kingsholm. As I write, for example, City Councillors are trying to get one alley used by criminals (between Salisbury Road and Hartfield Rad in Barton) closed and there have been problems on London Road too. In Cheltenham, St Pauls and St Marks may also be candidate areas. 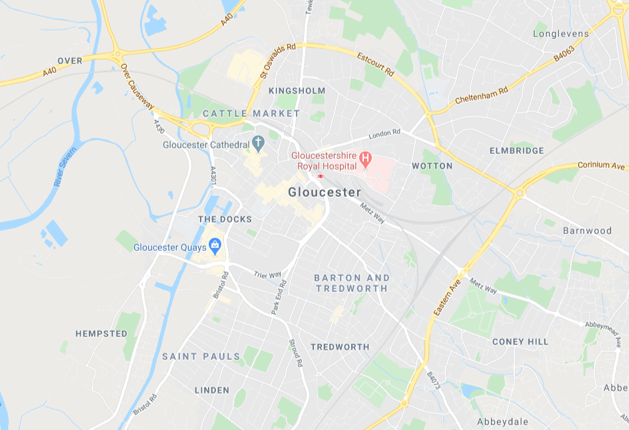 Map of Gloucester including Kingsholm and Wotton and Barton and Tredworth

Curiously the OPCC's long letter suggests some analysis was done they had identified areas in Cheltenham & Stroud (without saying where exactly) that might qualify. What isn’t clear is why no pockets were found in Gloucester and why the PCC thought none at all in the whole county were important enough to pursue.

We can't be sure how much we would have got, but if Surrey (not renowned for high depravation rates or crime levels) won £547,000 we would have surely got at least as much.

The PCC is not my opponent, but I have a duty to see the job done well. So my agenda is a simple one: to ask questions on behalf of my constituents and I hope local media will help find the answers to these key questions:

1. Why did the PCC claim the fund was about county statistics when it was clearly about neighbourhood hotspots?
2. What analysis had the OPCC done to see which areas might qualify?
3. How many areas of between 500 and 3,500 residents are there in the county that would in fact meet the primary or secondary criteria? (Please name them).
4. What communication did he have with Safer Gloucestershire on the Safer Streets Fund before deciding not to bid?
5. Given the success of 36 counties (including the safest county in the country) does he regret not having put in a bid?
6. What message does he have for residents of areas in Gloucester and elsewhere that could have benefitted from an additional £500,000 pounds of funding?

If it turns out that there are good answers to these questions I’m happy to say so. But my sad feeling at the moment is that our county, and the city I represent, have been let down. That is very disappointing. After all Police and Crime Commissioners were created to use new powers, funding and to keep a strong focus on driving down every pocket of local crime.

P.S. Please let me know if you think there are any areas which have particular safety problems by mailing richard.graham.mp@parliament.uk

How are we doing on vaccination?

Do see my enews on 'How are we doing on vaccination?'