URGENT: Flooding in Gloucester? Hoping for the best & preparing for the worst 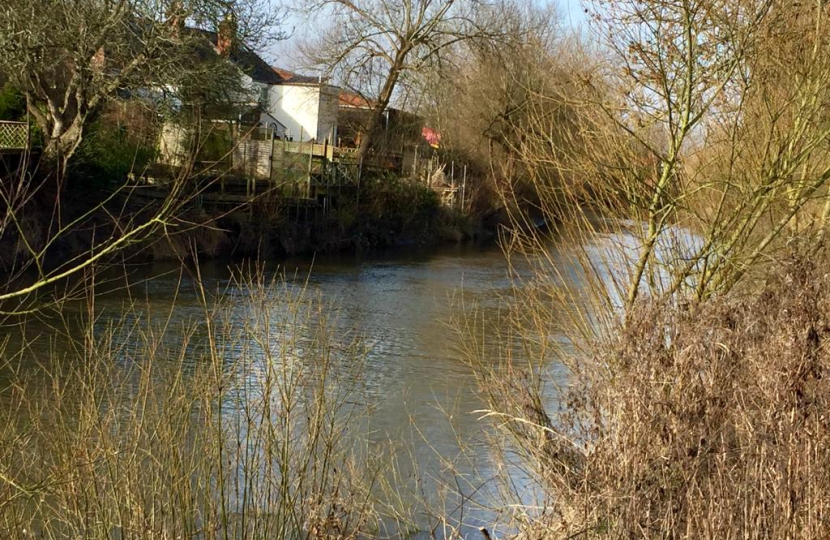 Since early autumn I have had an instinct that we will be tested with floods again this year, and have been urging our local Resilience Forum, the Environment Agency and our City Council to communicate with residents - to remind us all what information is available where, and what we should do to be prepared.

Much has been done, with local government websites updated, EA plans put in place and flood info distributed on Alney Island. But although we've been fortunate so far floods at this time of year don't give much warning. And it looks as if Friday could be a very dangerous day for flooding.

So please do share this immediately with friends and families, in or close to Gloucester:

Heavy rain (Storm Eunice) and spring tides have led to a flooding warning issued for the River Severn at Hempsted. Rea Lane is usually the first place to be flooded so residents there please be prepared with evacuation plans and a vehicle at the top of the lane if water rises fast and needs must.

More widely the EA has warned of the potential for severe widespread flooding all along the Severn and Wye rivers, with very strong winds, high waves (and defences likely to be overtopped). Record water levels are not ruled out. The highest level short term is likely to be reached between 0730-1130 Friday morning.

I recommend, for example, that residents of Alney Island get everything possible off the ground floor and onto higher tables NOW, that residents with riparian rights along the Daniels, Sud and Horsbere Brooks as well as the Twyver check ASAP there are no blockages close to your gardens or homes - and I hope councils will be doing the same for example where the Brook goes through Tredworth Cemetery.

Please also report any major drain blockages you see on the Highways section of the County Council website https://www.gloucestershire.gov.uk/highways/roads/your-highways-report-it/?Confirm_Code=HI15 urgently.

What other preparations should we make?

There is a lot of good material on both the County and City Council websites (see https://www.gloucestershire.gov.uk/planning-and-environment/flood-risk-management/ and https://www.gloucester.gov.uk/community-living/emergencies/flooding/), but if I was to highlight a handful of key things they would include:

How do we stay informed of what's happening?

41% of those at risk don't stay informed - so please don't be one of them. Follow the EA on Twitter @EnvAgencyMids and for River Severn levels at Gloucester see EA tweets on @river_level0065, contact Floodline on 0345 988 1188 or download the Smartphone Flood Alert App HERE.

How bad could it be?

Residents who've arrived in the last 15 years - many thousands - need to know that Gloucester has suffered badly in the past, with 2007 the worst in living memory, and near misses for many in 2010 and 2014 in particular.

But haven't we made improvements since?

Yes the Horsbere Brook lake and a complete overhaul of the sewers and drains in Kingsholm and Lower Westgate in particular, a higher wall on Alney Terrace, Brook clearance in Hucclecote, Grange and other wards and more drainage work in Hempsted have all been improved, in some cases substantially.

So aren't we safer now?

We are in some ways, but the impact of climate change, as well as the combination of high tides, heavy rain and high river levels mean we will always have a risk of being flooded.

At least 15,000 households in Gloucester live in flood risk areas, and 5% of those are deemed high risk.

Many of us are statistically more likely to get flooded than burgled.

What are the main forms of damage?

The practical and emotional damage and actual cost of flooding can be considerable. Flooding in the UK between November 2019 and March 2020 was estimated to cost about £333 million (although it is reported it would have cost an extra £2.1 billion without flood defences).

And then there is the human and emotional cost, homes and livelihoods destroyed.

Can I get flood warnings direct?

Yes: you can sign up for flood warnings at https://www.gov.uk/check-flooding where you will be invited to enter a postcode in order to see relevant information on current flood warnings and alerts; river, sea and groundwater levels; and flood risk in the next 5 days.

Remember you can also check long term flood risk to your address from the same link, or call Floodline on 0345 988 1188 or text.

Also you can contact the Council by phone on  01452 396 396, by email: heretohelp@gloucester.gov.uk, or via your local Councillor.

If you want to improve the flood protection of your property, the EA recommend that they initially visit the website of the National Flood Forum, an independent charity who advocate for those at flood risk https://nationalfloodforum.org.uk/about-flooding/reducing-your-risk/protecting-your-property/ .

What am I doing to help?

It's a mixture of national and local.

In Gloucester I've encouraged new EA schemes for Alney Island flood defences. It's a community at constant fear of flooding.  EA has finally said there is now funding and has proposed a new scheme. Alney island residents have had a letter from the EA on this.

Nationally the Flood and Coastal Erosion Investment Plan, which sets out how new flood and coastal schemes will better protect 336,000 properties by 2027, helping to avoid £32 billion in wider economic damages and reducing the national flood risk by up to 11%.

I worked with several colleagues to help create the ‘Severn Partnership’ to consider new reservoirs in the Welsh hills to hold water back in flooding season, releasing it later by pipe down the Severn (and ideally through the canals) to the River Thames (given London always runs short of water).

How prepared strategically we are in the UK is another important issue. I sit on the Joint Committee (House of Lords & House of Commons) for National Security Strategy (JCNSS) and we’ve issued reports on flooding and pandemics.

Preparedness and prevention are key, and every one of us can take small actions to help build resilience in Gloucester.

I've also been closely involved in holding water companies to account through the Environment Bill - but this isn't the place for that, which is a slightly different question.

Bottom line is that there's always more all of us can do.

The key thing now is for us all to get the right info, make sure we're prepared, are thinking about our neighbours and are ready to move if need be.

Let me know on richard.graham.mp@parliament.uk if you can't find the answers you need on the links I've given, and me and my small team me will try our best to help.