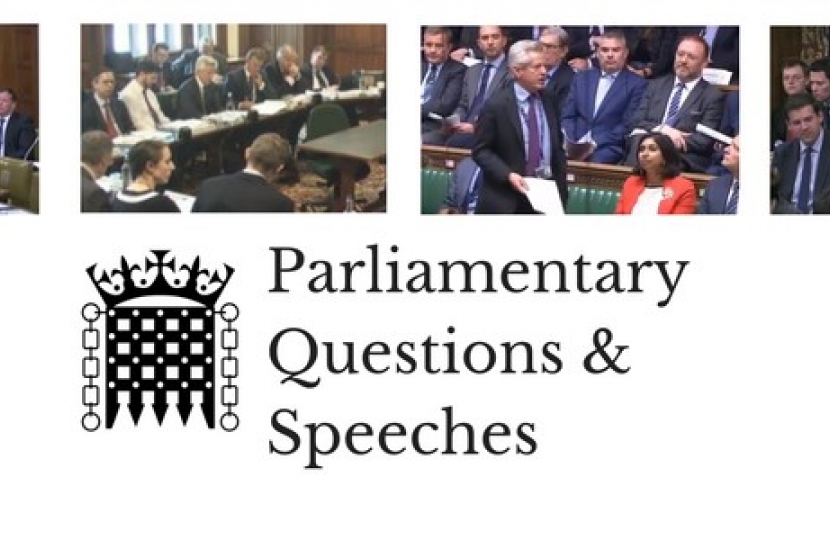 On Wednesday I negotiated with the opposition not to call a vote - which they would have lost - on an amendment intended to (partly) protect shopkeepers more: and instead to have a roundtable discussion with the Minister, unions, myself and others about their aims, whether further law is needed and if so, what would be best.

I think this was a good result for everyone and I'm grateful to Minister Vicki Atkins and David Hanson for their agreement. Helping a union (USDAW) to find the best way forward on this occasion seemed to me right and that's what politics should be: Judging an issue on its merits.

USDAW confirmed their support for this in the Press Release below:

Shopworkers’ trade union leader Paddy Lillis has welcomed a commitment from the Home Office for a round-table discussion with the union and retailers on how to legally protect staff from violence, threats and abuse.

Speaking during the report stage of the Offensive Weapons Bill Home Office Minister Victoria Atkins told the House of Commons: “We want to ensure that our shopworkers feel protected as well as actually are protected by the law, so if I may I'd like to reflect further on it. I’d like to invite (Mr Hanson and Tory MP Richard Graham) and organisations involved in the retail arena including the trade union into the Home Office for a round table so that we can discuss the concerns that have been raised this afternoon further.”

The Minister was responding to an amendment tabled by David Hanson MP that would create a new offence if a person attempting to illegally buy corrosive substance or knives abuses, threatens or assaults the retail worker who is enforcing the law.

David Hanson MP says: “Following the Minister’s offer of a meeting with Usdaw and retailers I agreed to withdraw my amendment on the understanding that an amendment to the Bill can be brought to the House of Lords. I hope that we can make progress on this key issue that impacts on the lives of so many retail staff, this issue is not going away.

“I am grateful to Usdaw for their support along with the Co-op Group, the British Retail Consortium (BRC), the Association of Convenience Stores (ACS) and the Co-op party, who are all seeking Government action to tackle the growing problems of violence, threats and abuse against shopworkers.”

Paddy Lillis – Usdaw General Secretary says: “We are pleased that the Home Office has agreed to sit down with us and the retailers to explore legal protections for shopworkers that are assaulted, threatened and abused for simply doing their job.

“Shopworkers are on the frontline of helping to keep our communities safe by enforcing the law on age-restricted sales. Their role should be valued, they deserve our respect, but most of all they deserve the protection of the law. When retail employers, the shopping public and the shopworkers’ trade union agree on a measure to protect staff, it is only right that the Government takes notice.

“We need a better balance in the law. The existing offence of common assault is not enough, because it is rarely used and difficult to prove in cases of verbal abuse and threats. A specific offence of obstructing a retail worker who is enforcing the law, which is easily understood by employers, staff, police, judiciary, shoppers and most of all violent criminals is absolutely necessary.”

Usdaw (Union of Shop, Distributive and Allied Workers) is the UK's fifth biggest and the fastest growing trade union with around 430,000 members. Membership has increased by more than 28% over the decade. Most Usdaw members work in the retail sector, but the union also has many members in transport, distribution, food manufacturing, chemicals and other trades.

Usdaw’s annual survey is showing a 40% increase in incidents of violence against shopworkers since 2016, with threats and abuse also up significantly. Worryingly the survey revealed that 1 in 6 retail staff who have been assaulted don’t report it, mainly because they don’t think it will make a difference.