We’ve put a few toes in the water on renewable energy in Gloucester before. The City Council put up a small wind turbine on Alney Island in 2008. The Gloucestershire Solar Co-op was created in 2010. I tried to get a leading insurance company to provide solar panels on all our schools in 2011-12. That proved too complicated legally. Most promisingly Tidal Lagoon in Power relocated to Gloucester in 2014 to launch its case for a Tidal Lagoon in Swansea.

I spent a huge amount of time supporting this campaign as Chair of the Marine Energy All Party Group, and launching the positive Hendry Review. But eventually that project failed, largely on the cost to the taxpayer as offshore wind prices tumbled.

But this time I can report to you on something that is very big and definitely happening. Here’s the summary:

Gloucester will soon produce bio mass, solar and wind power and possibly hydrogen energy as well: a new wood with (eventually) more than 100,000 trees. How?

This is an aerial view of the c.360 acre Enovert owned Recycling Centre in Hemspted. The City Centre is at about one o’clock off this view.

On it I’ve marked the main ingredients of the plan (and rough acreage involved). Basically almost all of this site will now become a generator of green energy and compost or form part of the new Hempsted Woods so we now have an outline plan, a committed business, the land and the scope to achieve more homegrown renewable energy of our own than any other city in Britain.

This has all been made possible by stopping landfill of waste from the county going into the ground at Hempsted. By transferring Gloucestershire’s residual waste (ie black rubbish bags) to the waste to energy plant at Javelin Park, the old tip on the edge of the River Severn at Hempsted has become a pure Recycling Centre - and the land of this enormous c.360 acres site instead of landfill is now available for something much more creative.

The owner - Enovert -  is an operator of waste resource facilities around England. They have already transformed former landfill sites into country parks (Lyme and Wood Pits Country Park in Liverpool) with public open spaces and strong community ties. Ours will now be the first to be transformed into renewable energy generation alongside an ecopark.

In September 2019 I organised the first meeting with Enovert and the City Council and wrote in an e news then that: “The goal of a Greener Gloucester for residents, with green energy opportunities for our city and a biodiversity park is a real one, and something I will do all I can to help bring about.” That became one of my six pledges in the snap General Election of 2019 and this is now the implementation of that pledge.

Since then we’ve had many meetings and 15 months later Enovert CEO Mark Silvester, City Council Leader Richard Cook and I yesterday planted 73 of the first 2,000 willow trees around the Household Recycling Centre with 4,000 more to come -  from which to generate coppiced biomass directly into the existing Western Power Development (WPD) grid connection, which already generates 4MW a year of gas from landfill.

Over the next week Enovert will formally apply for planning permission for the first phase of 8,000 solar panels (or 2MW) of solar energy for local businesses and all the energy needs of Enovert’s operation at Hempsted and the Household Recycling Centre operated by Ubico.  Once phase two is finished (another 8,000 panels and 2MW) the solar farm is intended to cover 98 acres of land on the site.

So our Recycling Centre’s energy consumption will be entirely provided by green energy generated there - a great example of what can be achieved in the Net Zero Challenge by business. Meanwhile alongside the site in Spinnaker Park a recent investor are expanding and consolidating their presence in our city, not least because their energy will now be provided from Gloucester’s Green Energy Park.

This shows that producing our own green energy can not only help business be greener, but boosts inward investment as business looks for green solutions.

Enovert's next plan is to consider two wind turbines - all subject to rigorous environmental and planning laws.

The last and perhaps most exciting phase will then be looking at generating hydrogen - with the possibility (for example) of providing hydrogen powered buses around our city and county. This would heavily reduce the current fumes from diesel powered buses and Gloucester’s carbon emissions and improve air pollution as well. That could be a reality within three years if all goes well.

At the same time Enovert will develop a new c.250 acre Hempsted Woods with 100,000 native tree species planted, left to wild but partly accessible to walkers and school groups. Enovert will have further discussions with organisations like the Woodland Trust, the Glos Wildlife Trust and the Woodland Carbon Trust to develop this vision which will include a chance for businesses and individuals to offset our carbon emissions by paying for trees here in Hempsted. 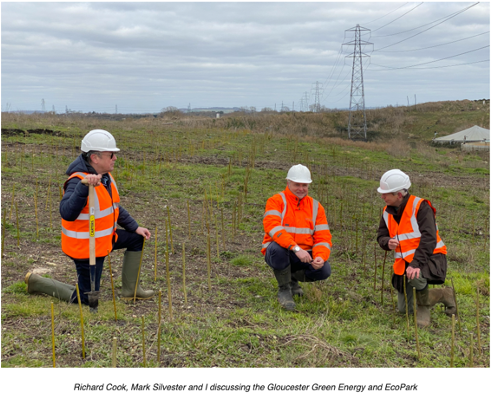 Richard Cook, Mark Silvester and I discussing the Gloucester Green Energy and EcoPark

If it works then Enovert will have a model to export elsewhere to their other 13 sites. In fact there are over 2,000 landfill sites in England alone where similar action could happen. So we need Gloucester’s Green Energy Park to succeed.

That means above all City Council support - particularly for planning - which Leader Richard Cook (who has been planting trees for years) and officers are committed to provide. But it also means business and community support and we’ll all be involved in that. There would have been school children with us yesterday if it wasn’t for the pandemic: but they will be soon. I want every child in Gloucester to plant a tree here.

In the year of the UK hosting the Climate Change summit COP26 there could be nothing that shows my and our commitment more than launching Gloucester’s Green Energy Centre & Eco Park. This whole project is financed by the business itself, not the taxpayer, and it could not happen without Enovert and its CEO’s huge drive to see this happen - setting a precedent that will transform their business, and help transform Gloucester.

I believe this is an incredibly exciting environmental and green energy development in Gloucester, and will transform perceptions of our city as well as make giant leaps to meet our city’s Net Zero targets. Making Gloucester Britain’s Greenest Small City is an achievable goal not hyperbole.

PS Let me know your reactions and what more we can do to be a greener city on richard.graham.mp@parliament.uk