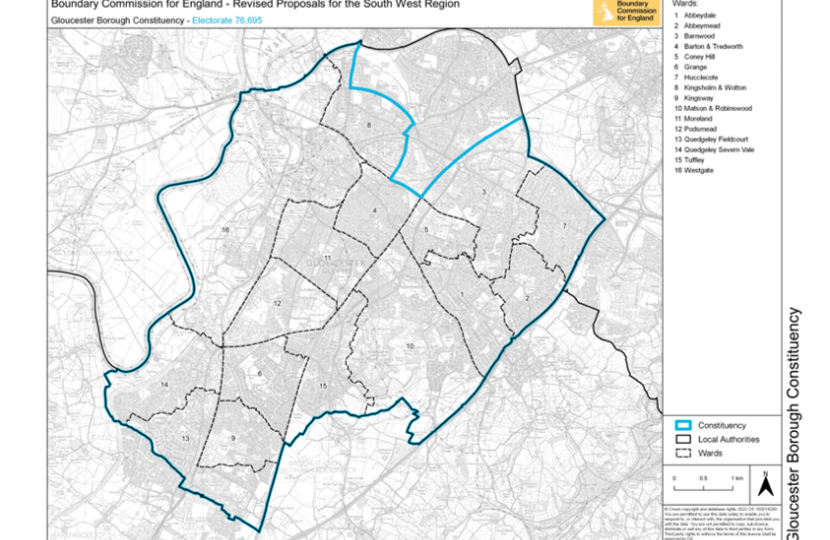 At the same time I’m disappointed that the Commission has been unable to find a way of enabling Elmbridge residents to do the same, because the population of Gloucester is greater than allowed.

In essence Gloucester has roughly 4,500 more voters than the maximum 77,062 allowed. The Commission therefore proposed that voters in both Barnwood and Elmbridge vote for an MP for Tewkesbury, an idea supported by both the Labour and Liberal Democrat parties.

I made the case to my party that it was not necessary for voters from two wards in Gloucester to vote in Tewkesbury (and that the numbers of voters in Tewkesbury would be within the bands allowed if only one ward was affected).  Both they and the Boundaries Commission agreed.

The Commission also agreed that because Elmbridge is part of the Longlevens division, and Longlevens residents already vote for an MP for Tewkesbury, there was slightly more logic in Elmbridge ward rather than Barnwood being part of Tewkesbury constituency.

I note that Gloucester Liberal Democrats proposed residents of two wards in Quedgeley and Kingsway should vote for a different MP, rather than residents of Barnwood and Elmbridge. This was not supported by Gloucestershire Liberal Democrats or the national Liberal Democrat Party, took no account of changes elsewhere in the county, involved too many residents and was rejected by the Commission. They felt all 3 wards to the south of Gloucester would have to vote for a different MP together, that Gloucester should not lose so many voters, as well as this having a considerable impact on the rest of the county. It wasn’t clear either in which constituency those residents would instead all vote for. Residents of Quedgeley and Kingsway may be relieved that this local Lib Dem idea was rejected.

So although I am sorry that at the moment it looks as if residents of Elmbridge, some of whom live very close to the city centre, will in the future vote for an MP for Tewkesbury I accept the Commission’s logic.

And I am pleased that I and the Conservative Party managed to persuade the Commission to change their proposals for Barnwood residents.

Because everything derives from the mathematics and has cross border knock on implications, the key to Boundary Commission proposals is to find the least worst solution that affects as few residents as possible.

I believe we have achieved this with changes that affect 4,814 not 9,794 (including Barnwood) or circa 15,000 in the south of Gloucester.

I will continue to work closely with Elmbridge residents for as long as I represent them and indeed was at Elmbridge Primary last week.

Lastly you never know if any Commission changes will happen until they happen, and the process still has quite a way to go before it’s completed. So it’s business as usual for now and at least until the General Election in 2024.

Meanwhile can I encourage constituents, and especially from both Barnwood and Elmbridge, to read the report and give their feedback to the Commission via www.bcereviews.org.uk by 5th December. You are welcome to copy me so I know your views.

There's a slightly gloomy consensus out there that 2022 was a bad year for the UK.