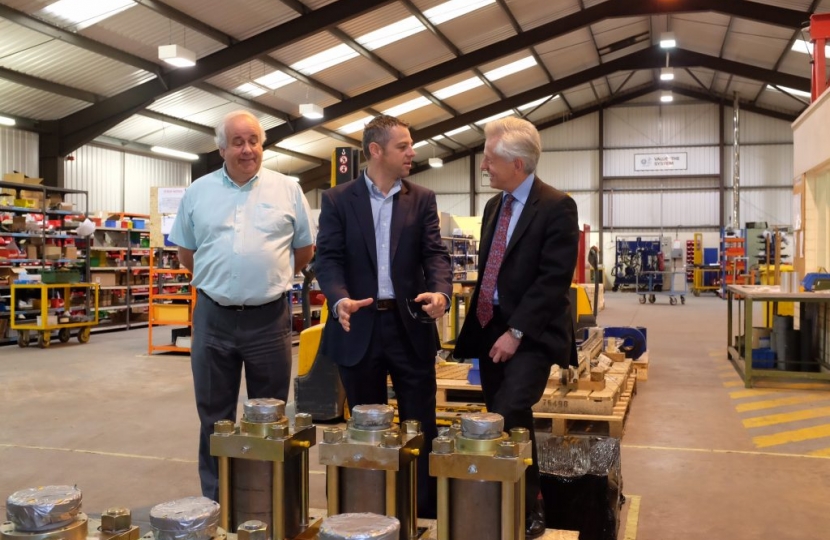 Gloucester’s MP Richard Graham MP says that HRH The Duke of Kent presenting Helipebs Controls with a Queen’s Award for Enterprise for the first time shows how far the company’s exporting success has come since the financial crash in 2008: ‘this is a Phoenix like recovery for the Elmbridge based engineering company, based on quality and service’.

Helipebs Controls are to be presented with the Queen’s Award for Enterprise International Trade 2016 by HRH the Duke of Kent, accompanied by the Lord Lieutenant of Gloucestershire Dame Janet Trotter on Wednesday 26 October at 2pm.

Richard first went round Helipebs in early 2007, later taking then Shadow Secretary of State for Communities and Local Government Eric Pickles to visit. He said, “I saw immediately the potential for the business – they make the cylinder in every Dyson vacuum cleaner, parts for Jaguar Land Rover and testing equipment for Saffran Messier Dowty.”

The City MP, who is also the Prime Minister’s Trade Envoy to much of South East Asia, added “there is no higher honour for any business than being awarded a Queen’s Award for Enterprise. What a great company we have tucked away on Sissons Road in Elmbridge – huge congratulations to Chairman Geoff, MD Andrew and all the team.”

The award was presented by HRH the Duke of Kent. Helipebs Controls have grown their overseas sales by 142% from 2013 to 2015 by extending their product range and servinga variety of industries across the world.