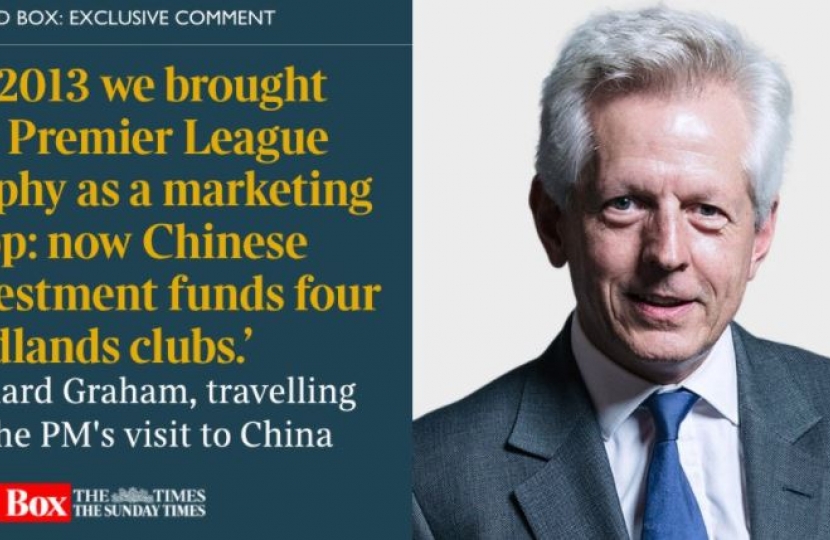 Just over four years ago I accompanied then Prime Minister David Cameron to China, and this week I return with Prime Minister Theresa May. Much has changed in both countries in between, and the bilateral relationship has, despite some attempts to suggest otherwise, in fact strengthened considerably. What can we expect from this visit?

In 2013 the Conservative led Coalition government focus was on international engagement and inward investment, mirrored by China’s desire to go global, export capital and access our financial markets and nuclear programme. That in turn led to President Xi Jinping’s 2015 state visit and the ‘golden era’ of UK-China relations.

Since then strong growth of both Chinese students and tourists is a key factor in our strong tourism revenue and why we now export more in education than insurance. We’ve consolidated our leadership in offshore renminbi trading and above all, in a year when total Chinese overseas investment (deliberately) fell by a third, their investment in the UK more than doubled between 2016 and 2017.

While some of this may have been driven by post Referendum currency weakness, now largely reversed, much is strategic. The (Beijing) Zhongguancun Science Park, for example, has an office in London to access London’s “abundant cutting edge technology created from its leading universities”: while the (Shanghai) Pudong Development Bank’s first non-Asia branch reflects their “complete confidence about the importance of London as a financial hub long term”.

This visit by the Prime Minister, International Trade Secretary Liam Fox and a large business delegation therefore aims to maintain the positive momentum. Increasing trade, and not just in services, education and tourism, where Chinese demand has grown exponentially, will help drive further jobs and growth across both countries.

What’s new is the increased role of technology driven innovation, a priority for both sides and often referred to by Xi and his Premier Li Keqiang. In 2013 we were delighted with JLR exports. Now there are also talks on driverless and electric cars, life sciences and Artificial Intelligence. Then we were starting to trade renminbi: today there’s fin tech, Ed-tech and cyber. In 2013 we brought the Premier League trophy as a marketing prop: in 2018 Chinese investment funds four Midlands football clubs. And whereas then our new strategic partnership was about investment in China or Britain, today there are a growing number of collaborative projects in third countries, not least from China’s ambitious Belt and Road projects (about which the China Britain Business Council produced the first ‘manual’).

Perhaps most importantly in 2013 China saw us as an ally to try and increase trade with the EU: now we can discuss ambitious options for our future trading relationship, including a potential Free Trade Agreement. An advisor to China’s State Council described this as a potential ‘breakthrough point’ in their foreign trade relations.

At the same time this visit is not just about business. Many millions of Chinese saw and will have been moved by the BBC’s Blue Planet 2, and environmental pollution is an area where both of us want change. China will have noticed how we’ve slashed plastic bag usage, and her contribution to the war on plastic, which affects her long coast line, could make a huge global difference.

On wildlife protection, the All Party Parliamentary China Group this week hosts a WWF and Chinese government reception to celebrate their ban on ivory sales, a remarkable development. Meanwhile our success in reducing coal energy is relevant to China’s journey (60% of all her energy is generated from coal) and increasing green energy is vital to both of us. Don’t overlook either the important work done by the Great Britain China Centre with Chinese interlocutors on rule of law issues.

Lastly the Prime Minister will discuss regional and global security, as she has done several times with Chinese leaders, during private talks: a key part of the ‘golden era’ relationship between two permanent members of the UN Security Council.

Over the thirty seven years I’ve worked with and in China, the bilateral relationship has strengthened and widened considerably. What was a relationship dominated by government, and later business, is now one where shared people to people exchanges and experiences are increasingly important, and real friendships common. But the relationships at the top still matter greatly, and this visit by our Prime Minister should lead to an even stronger partnership between global Britain and an increasingly global China.

Richard Graham MP is Chairman of the All Party Parliamentary China Group, the Prime Minister’s Trade Envoy to the ASEAN EC and a former British Trade Commissioner China.