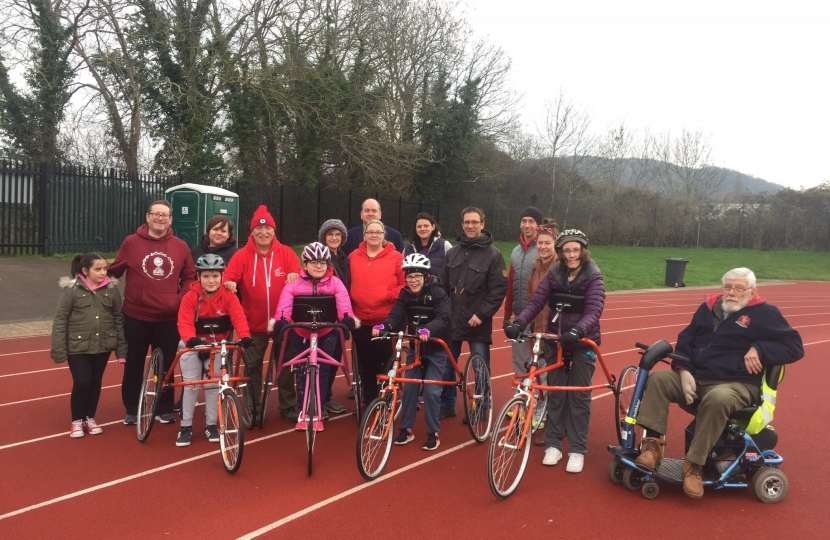 Every Sunday, Tuesday and Thursday morning a wonderful collection of adapted bikes are available for hire (£5 a week) at the Podsmead based Blackbridge Athletics Track. They can be used for people who’ve had strokes and whose balance is wobbly: by old people whose feet or legs hurt carrying weight: by young people with cerebral palsy to build leg muscle, or by those who’ve lost legs to build arm muscles – for whatever apparent disability makes normal exercise difficult Glouce...stershire Wheels for All has an answer.

How did this come to be? During the renovation of the Track itself, which Athletics Trust dynamo Bob Purcell, I, the City Council and others worked together on successfully in 2010-2011, we all envisaged competitive athletics as the goal, with community goals as an add on.

After completion, the determination and commitment of Mary Clare Faulkner of the Leonard Cheshire Foundation has made adapted cycling possible, with help from Leonard Cheshire and several others, including Marie Owen Chair of the Chamwell Centre (Milestone School project) and other paediatricians. Athletics Trust Chair Dave Robinson was keen too.

And now there are some achieving amazing dreams, like 17 year old world champion race runner Charlie Denman from the Forest of Dean. Alongside her and her parents I met other children, coaches (like Helen Hoy from Quedgeley) and about ten or so of those using the adapted bikes - whether aspiring to do their first lap or go to the Paris Paralympics in 2024.

These are the only adapted bikes and track facilities between the north of Herefordshire and the south of Wiltshire, so it’s another little known example of what makes Gloucester special.

When Bob and I were lobbying Sport England for funds to get this track back in action and to hold competition events again in Gloucester I never imagined this would be one fabulous outcome.

But it is, it’s happening and we should spread the word.

I want to get my 90 year old Dad here: he hobbles with a stick, but he could join others in the family on the two person bike, get exercise, be outside and benefit from all the good things that come from both. Who do you know who would benefit - maybe on the family bike for four?

Q&A on the Trade Bill, the NHS & Trump

Thank you for writing to me about last week’s Trade Bill and for the Public Sector pay rises.