Appointed as Trade Envoy to the ASEAN Economic Community 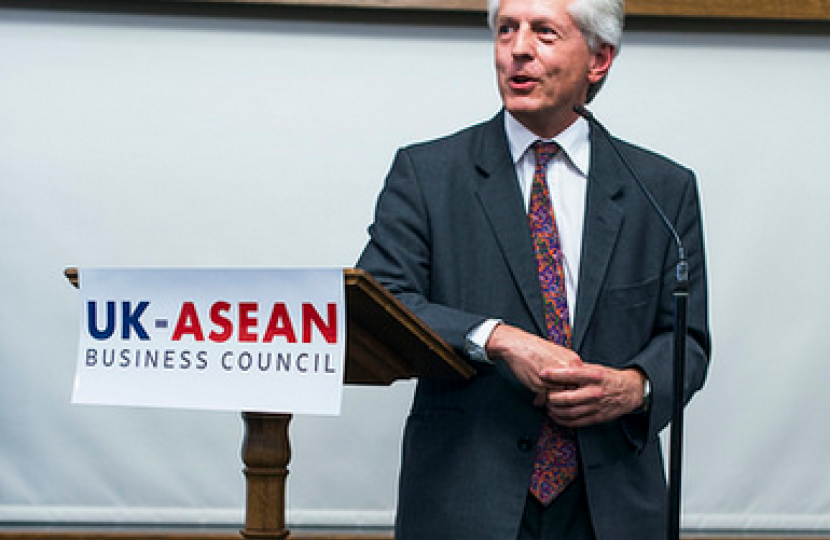 Prime Minister David Cameron announced this evening to ASEAN Secretary General Le Luong Minh that he was appointing his Trade Envoy for Indonesia, Richard Graham, also to be his Trade Envoy for the ASEAN Economic Community, a single market which comes into being this December.

Richard Graham said ‘the ten ASEAN nations ranked 12th in the global economy in 2012, when the PM last visited Indonesia, and 7th today. They will move higher again soon. As ASEAN opens up and focuses on eg its infrastructure needs it’s important that we highlight British expertise.

There are real opportunities both to increase our exports and contribute to ASEAN nations’ growth. So to help the Prime Minister and work with UK businesses achieve more out here is a natural extension of what I’m already doing and I’m delighted to take up the challenge’.

Richard added that more local businesses were active and winning business in ASEAN countries than five years ago, and highlighted Poetons’ joint venture in Singapore, as well as engineers like Severn Glocon and all those who are aerospace contractors or subcontractors: ‘business for Airbus and Rolls Royce will continue to boom as Asia grows and more people travel by air’.

Tomorrow the City chairs an infrastructure round table the PM will join and speaks at other business events in Jakarta.

Richard was appointed the PM’s Trade Envoy for Indonesia in 2012. He has previously worked in several ASEAN countries and lived in Indonesia and the Philippines, as well as Hong Kong and China in the wider region. He speaks several of the languages spoken in the region.

The Prime Minister is in South East Asia with 31 representatives from business from every region of the UK as part of our One Nation approach to business.  He will sign trade deals worth over £750 million which will create over 270 jobs across the UK and will become the first British Prime Minister to visit the ASEAN headquarters in Jakarta.

Over the next 20 years, 90 per cent of global growth is expected to come from outside Europe and Britain must be poised to take advantage of this.

That is why the Prime Minister is in South East Asia to secure trade deals worth over £750 million, creating new opportunities for hard working people back at home. We will also make available up to £1 billion to finance infrastructure projects in Indonesia through its export guarantee scheme. To encourage further trade links we support an EU-ASEAN free trade agreement which would open up a market of 500 million people to British business.

These new trade deals are part of the Government’s continued efforts to get 100,000 more UK companies exporting and increase the value of British exports to £1 trillion annually by 2020. This is part of our long-term economic plan to build a stronger economy, which will create more jobs and build a better future for people across Britain.