WHY THE CHELTENHAM HUSTINGS MATTER FOR BOTH PARTY AND COUNTRY 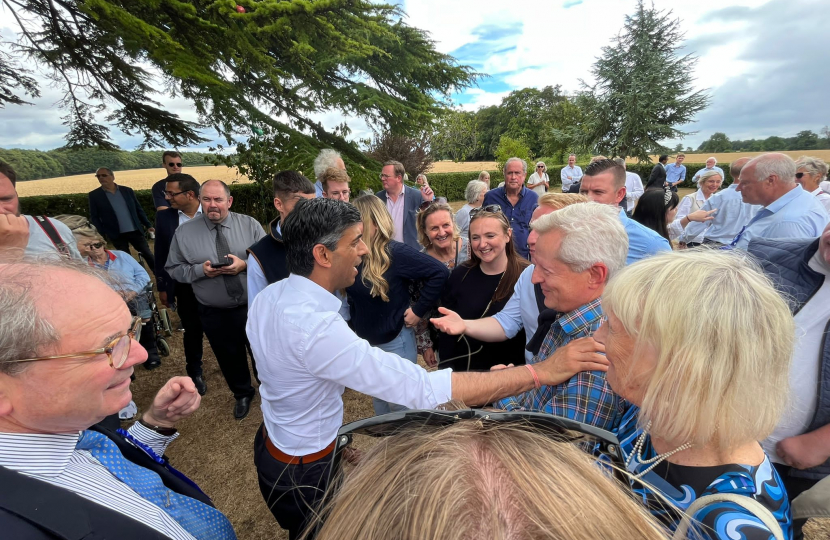 This evening’s hustings in Cheltenham are a debate for the two candidates to be our next leader, and a decision moment for many Gloucestershire members in a county with all six MPs currently Conservative.

But they’re also a proxy for the challenges facing the whole country. And the person who deserves to win the debate, vote and become our next Prime Minister must be able to convince our country as well as our Party that he or she has the ability and the solutions to address the coming crisis.

Gloucestershire is a good melting pot for that. For (contrary to what many imagine) my constituency Gloucester is rich in history but not in income. We have wards in the top 10% of depravation and our average salary is almost a third lower than the national average. We have a very high percentage of public sector workers, particularly in the NHS. We are more Red Wall then Blue Rinse and in 2005, the election before I won this great cathedral city constituency, it was the only seat in the country that saw an increase in the Labour vote.

By contrast in Cheltenham, venue of the hustings and only 6 miles away, residents vote overwhelmingly Lib Dem in local elections but have three times supported my outstanding neighbour Alex Chalk to first win and then hold Cheltenham for us in general elections. The Lib Dems have it as their number one target seat.

The answer is not to make different promises to different audiences, nor to pick imaginary holes in the other’s argument. Levelling Up is clearly about need not geography: ‘poor’ Gloucester was always excluded from Labour strategy because it was in ‘rich’ Gloucestershire. Most seats have pockets that need help. Both candidates can agree on that.

Instead our new leader first has to start with a clean sheet on integrity. That means accepting none of us - especially a Prime Minister - should try to interfere with parliamentary process.

Any hint that a new government would try to whip votes on reports from the Privileges or Standards Committees, in a replay of the report on Owen Paterson, would again be disastrous. MPs, let alone our members or our voters, whatever part of my county or our country, would not tolerate it. Conservatives must play by the rules.

Secondly a new leader has to convince us that he or she has one overriding focus: how will the government enable tens of millions of people to get through to next summer without either going very cold or bankrupt and possibly both: and without believing that refusing to pay their energy bills is the answer.

Talking about standing up to China or beefing up intra Commonwealth trade are soothing tunes for Daily Telegraph and Express readers, but of absolutely no help to those wondering where to find another £2,000 for their heating bill from their £25,000 income - the average salary in Gloucester.

If the new Prime Minister doesn’t have a clear plan of how to solve that problem, recognising they will need an expensive mix of targeted interventions - including ‘handouts’ - then our Party will be hammered in 2024.

Thirdly, while every instinctive Tory voter hopes for tax to be lowered and regulations to be reduced - for the freedom to choose how you spend what you earn and express what you think - we are also realistic.

We will not solve service problems on passport backlogs, immigration and visa issues, driving licences or planning applications, dealing with asylum seekers or strengthening our cyber security - let alone meeting targets in the NHS - by cutting the overall public sector now.

The new PM will rather need to focus on how to deliver more and better outcomes from our public services. Radical decisions, for example, about what to do about those occupying beds in our acute hospital without an acute condition. For the party of government will
rightly take the blame if ambulances queue up for hours outside hospitals and public services are not seen to deliver.

Integrity - a bold plan for the crisis coming - and delivering efficient public services. I believe these three things are what many people in our country want to see above all, and our members are no exception.

Yes there are important debates about a strategy for growth, our position in the world and much besides. But getting through to next Summer needs calm crisis leadership on these three points immediately.

Both candidates have much to offer but in Gloucestershire five out of six of us MPs, the PPC and the Leader of the County Council have all agreed on who we think can best provide the leadership and focus both for our constituents and therefore for our chances in the next General Election, whatever the opposition.

We are backing the candidate battle tested in the pandemic, ready to take our country through this storm, guided by integrity: Rishi Sunak.

Now it is for our members to reach their decision: and so the Cheltenham hustings matter.