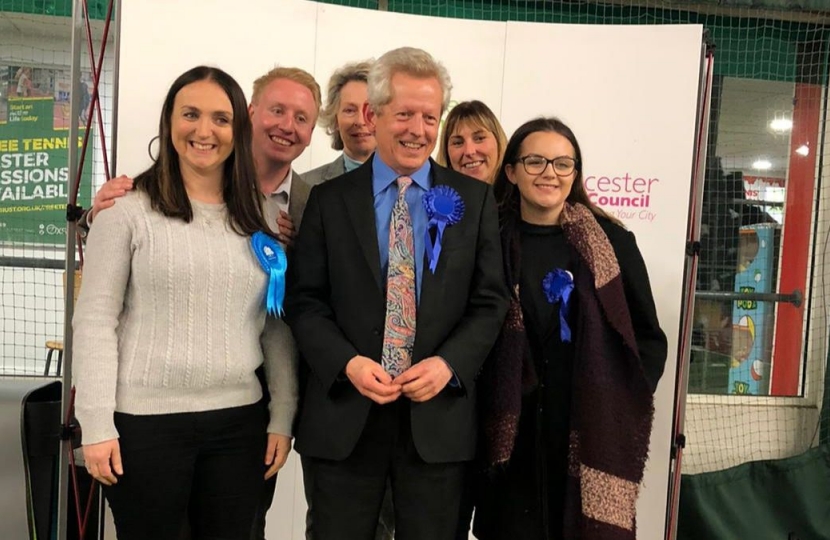 After the election it’s good to be back in touch with you all. Firstly to those who are constituents a big thank you for increasing the turnout in the Gloucester constituency (66%), and (however you voted) for doubling my majority (now the highest since 1987) and share of the vote (highest since 1935). I am very grateful for the honour of representing our city a fourth time.

But what matters now is how I repay the trust of voters. There’s a big national task of rebuilding unity after three and a half bruising years since the Referendum, and I hope to help in that - and there are the main Prime Minister’s promises, and we vote on one (Brexit) tomorrow.

But here’s a quick update on specific action I promised in Gloucester:

1. New healthcare centres next to Shire Hall and in Hucclecote

Behind the hoardings on Quayside you can see clearing work has been going on for the new City Health Centre. The new build work should start in the New Year & finish Spring 2021, serving 18,000 patients and with many new extra services

The Hucclecote/Brockworth Centre will take longer, but is agreed in principle a site (in between the existing surgeries) identified and commercial negotiations on the detail continuing between GP partners, our NHS Clinical Commissioners and the land owner. I will have regular follow up conversations.

2. Improved results and opportunities at Homeleigh Park and Gloucester Academy

I’ve seen that the new multi academy trust running Holmleigh (ex Beaufort) has already achieved a turnaround of results and pupil experience at Henley Bank (ex Millbrook) and am optimistic about a similar impact at Holmleigh after two recent visits. Year 7&8 pupils at Holmleigh also did a great job designing my ‘Caring at Christmas’ themed Christmas card.

I’ll be back at the Gloucester Academy in the New Year to see how things are moving forward there. My ambition is for both schools to make good progress in 2019-2020. 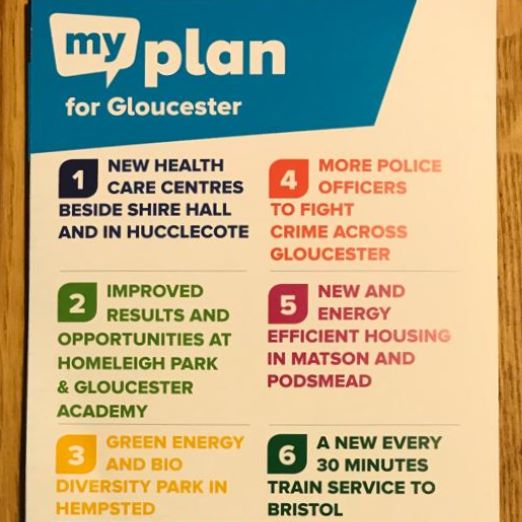 The six specific promises I made to Gloucester

3. Green energy and bio diversity park in Hempsted
The future for Gloucester’s Recycling Centre now that all residual (ie non recyclable) waste goes to the Waste tI Energy plant is exciting. The Enovert owned 360-acre site has potential to be a green energy maker: from thousands of fast growing trees that can be coppiced like willows, for biogas & possibly from a large solar farm too. Then there is the possibility of a biodiversity park with the right partner – which would also be great for walkers

Neighbourhood policing for Gloucester has never been cut, but we do need more police to clamp down on burglaries and helping people to feel safe in their communities, as well as major tasks like tackling drugs, cyber crime and modern slavery.

The good news is our Constabulary has the go ahead for 46 as the first phase of 150 more officers. We need to make sure this all happens smoothly and the perception of increased crime comes down

5. New and energy efficient housing in Podsmead and Matson

Getting more affordable and social housing has long been a major priority - and the reason I persuaded the treasury to write off £50m of Gloucester housing debt a few years ago.

Gloucester City Homes (GCH) has plans to replace old housing stock, re-landscape and build more and better homes in Matson and Podsmead. These will need help to realise and I’ll work closely with them to achieve that

6. A new train service every 30 minutes to Bristol to support commuters

These aren’t the only projects I’m focused on - my office is working with me on about 30: for example in transport alone from widening the A38 by Llanthony Priory to the new Gloucester-Cheltenham cycle way and the massive investment in the A417 Missing Link by the Air Balloon. And I’ll report to you on each of these as things move forward.

But these six matter - they cover different sectors and together could make a difference to a lot of lives in our city. So watch this space...

Let me know any other major priorities YOU have - social care, potholes, apprenticeships whatever - for me to read over during Christmas on richard.graham.mp@parliament.uk

Meanwhile it’s good to be back and Happy New Year!

An update on COVID19 restrictions