I’m told some local politicians occasionally refer to the Gloucester City Council as the ‘Vanishing Council’. It is quite true our Council has fewer employees than it did when I arrived at the end of 2006, and that in turn was fewer than in say the 1980s. But it’s also true that our successful joint £20 million Levelling Up Fund (LUF1) bid last year is a big and ambitious project well beyond what those bigger Councils achieved - and we’ve just submitted a further bid for £12 million.

Quick recap first on LUF1 and how it’s going. The project includes a national first: our former Debenhams becoming the first ex department store in the UK to be converted into a university teaching campus – with teaching and health professional courses starting at the Uni of Glos City Campus at the end of 2023.

A bat survey has caused a slight delay but otherwise a huge amount of invisible work inside the building is already done, and hoardings go up outside before long.

Some elements not widely known of the new building (see image) include a  ground floor Care opening onto Kings Sq, new library and Wellbeing Centre – all of which will make the improved Kings Sq (a separate £5m investment by the Council itself) the hub of of city activity. 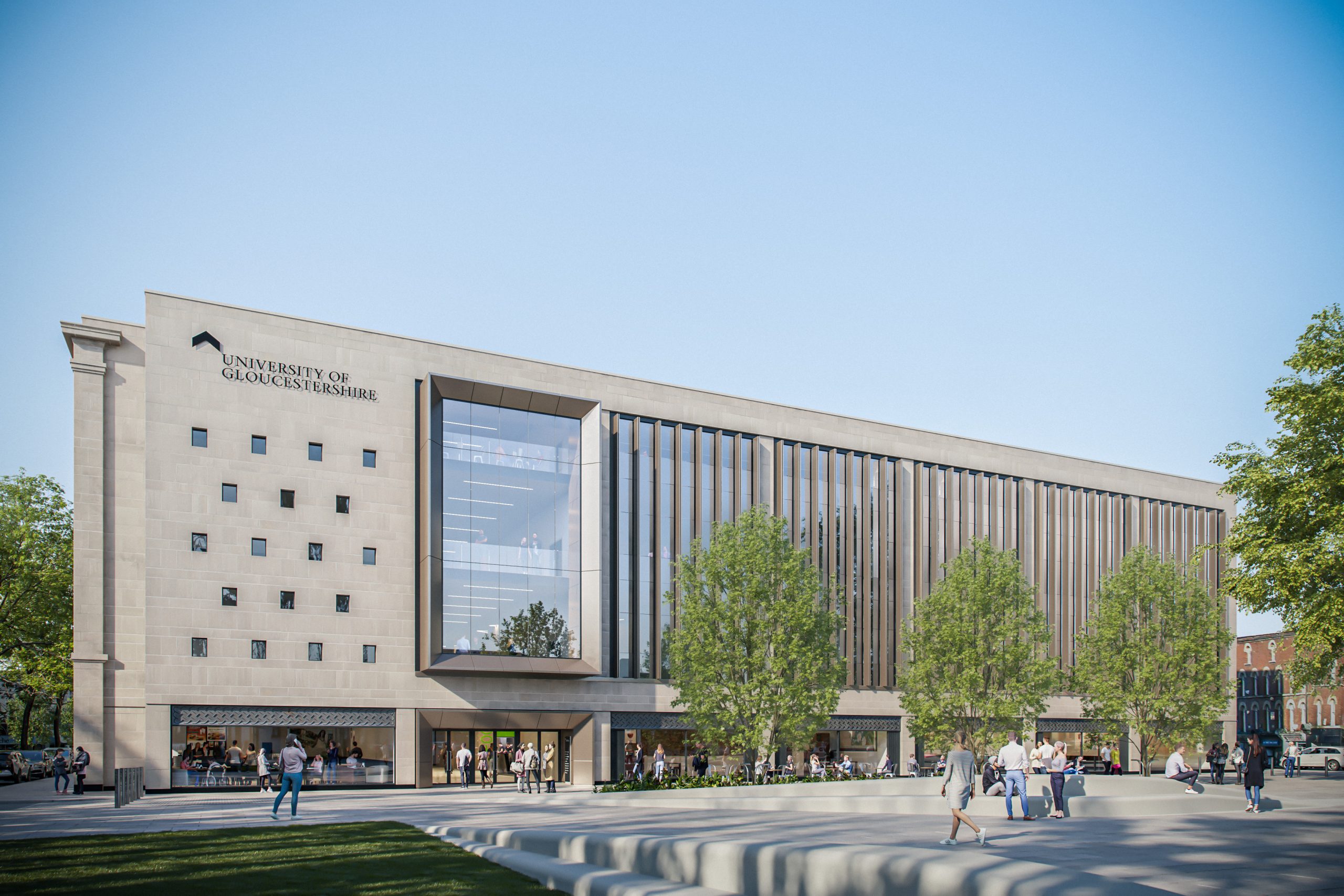 The other parts of LUF1 are The Forge cyber proofed for AI and tech businesses - part of the strategic partnership with Reef plc, also delivering a new 4 star hotel, homes, Tesco, car park, roof top bar and more - and the restoration of The Fleece. There’s been progress on both.

We can measure a council by the numbers of bums on taxpayer funded seats, or its contribution to Regeneration achievement: I would choose output every time.

Nor was the LUF 1 bid a one-off fluke. Only a few months ago our Council won the UK’s largest investment from the Homes England Brownfield Site Fund (£2 million), which enables a big development of about 300 new homes at St Oswalds including 180 social and affordable homes, looking towards the river and the Cathedral, and conveniently next to Tesco.

That also followed a significant £1.6m win by the Council from Historic England for improvements to the ‘Cathedral Quarter’ (ie Westgate St). You can see the scaffolding on Westgate St with works underway on various facades. Ultimately these improvements to Heritage should bring improved values, occupants and that grizzly but true phrase ‘the visitor economy’.

Now for our latest work. The Council and I have submitted a second £12 million bid proposal. ‘More, Oliver?’ 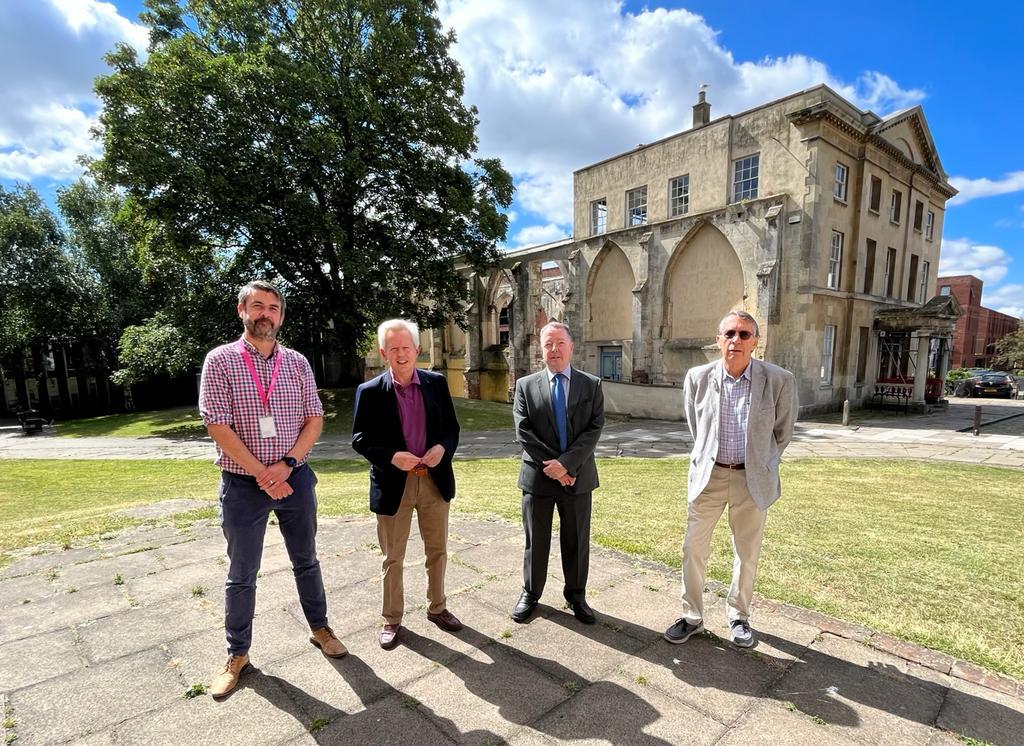 Officers, Councillors and MP at Greyfriars & working together on LUF2

Well yes we are seeking a second bite of the cherry. What are we hoping to achieve?

Firstly we only get this chance because of Longlevens. The constituency boundary review before I was elected obliged residents there to vote for an MP for Tewkesbury not Gloucester, and because the City boundaries encompass part of a second constituency the rules mean we qualify for a second bid. Thank you Longlevens.

The rule also framed our decision making. For example there could have been a transport element, but we’ve already had a Levelling Up Transport win last year via the County Council’s £11 million bid, not least to resolve the Llanthony Rd bottleneck – something I first sought several years ago. That work is happening right now (I know: there’s pain before the gain).

So bids needed quick agreement and no time for eg compulsory purchase of assets. And this benefited Gloucester because the Council is asset rich and cash poor, they and I shared the same vision and the Council has a development partner already working here - Reef. We can start straight away, and that’s in our favour in meeting tight deadlines.

Our plan complements what the Council/Reef has done/is doing around Kings Square, Chambers and the old bus station, all effectively in the quarter from Eastgate to Northgate St. This time our focus is on the other side of Eastgate St - around the Shopping Centre and Greyfriars.

In that part of our city centre the opportunity to bring back to creative and economically valuable life to unused or underused buildings and green spaces is huge.

Let’s start with Greyfriars itself – divided between the remains of the former 13th century priory, a classical Georgian addition (Greyfriars House) cut into the priory, and a garish 60s dividing wall. Owned by English Heritage (who gave the Council a long lease on Blackfriars) the Council bid proposes to buy the whole combined building, re-roof the priory (the roof went in the 60s, as Phil Moss recalls) and restore Greyfriars for spectacular commercial and visitor use.

Outside to the east of Greyfriars is a courtyard space flanked by a giant sycamore tree with the Eastgate Market one one side and the Shopping Centre on another at a right angle. There the blocked up ground floor arches run up to Addison’s Folly. The arches will be opened up to windows for the market traders, with a café, tables and umbrellas outside, while the quasi Italianate Folly itself (unused for a generation) becomes serviced apartments.

Meanwhile what was the market will be opened into one large space, with eg dance classes, yoga, drama and other public uses including even potentially a cinema screen: installing giant windows on the far side looking out to the re-opened public space of ex Greyfriars Bowling Club.

This in turn stretches to and absorbs the former little walled garden (it once had sculptures of Gloucester aircraft on the walls) right up to Constitution House – part of which I hope might also be open to the public as a cafe from the garden.

(Left) Greyfriars now and as proposed, (Top right) Bringing the courtyard and arches into life,
(Bottom right) Opening up the current market with windows to the new open Greyfriars Garden

From this you can see a whole new area for residents, shoppers, and tourists / visitors opening up in our city centre, creating jobs, new and better space for business and market traders, green public spaces and cultural / health activity. Part of this (Greyfriars BC) bang next to the back of the Museum, a connection that can be developed creatively in the future: for example sculpture exhibitions in the new garden.

I’ve been dreaming of some of these things for a very long time. After all if we can make great usage of Blackfriars, why not of Greyfriars? If the market is next to a green space why is it shut off from it by walls not windows? And why is the long closed bowling club not an open to all garden with banks of colour and a nature haven? If we have an 18th century folly why is it only used for junk storage? And why, when we have a beautiful almost courtyard square with fabulous afternoon light and a 13th century priory can we not have a café that draws from such a great setting?

The answer always was well yes great but who will pay? Now we have a chance to answer that.

Levelling Up old city centres  will always attract some cries of what about other parts of the city - there are deprived wards that need help. The wards of Matson and Podsmead both deserve better housing, better use of public space and some new infrastructure like a chemist in Podsmead. The main asset owner Gloucester City Homes and I have been talking about this for a long time. Getting resident agreement on plans has been hard. But there is progress there and I will come back to this.

Meanwhile however a vibrant city centre with a buzz of activity, jobs, shops, skills training and culture is what the whole city needs. The young want things to do, events to go to, outlets for their own talent - like the Music Works and The Jolt are showing. Older residents want to see the city’s heritage brought alive and great places to meet friends. Everyone wants to feel proud of their city, and this is what urban Regeneration is all about.

Is our bid compelling enough, high value for money, unlocking private investment and will it have the overall benefits that taxpayers must see?

I believe yes yes and yes. Peel, owners of the Quays, are excited and it encourages their own plans. The two hotel groups looking at 4 star hotels will be delighted. It complements what Reef, the Uni of Glos and many other businesses like the owners of the ex Argos are doing. Officers believe we have a strong case on value added and the cost value ratios.

Of course we don't know how strong other bids will be - and the pot is finite. But I will do my best to encourage government to see the merits of our case.

Some may say what we need is more direct support for business, which is going to have a tough time: or support for communities and residents as energy prices rise sharply in the autumn. How does this help?

Part of the answer is that we also have another bid going in for a separate pot to address these questions called the Shared Prosperity Fund. The City Council has created a strong bid for the maximum £1.6m for this, focused on business and skills support through the LEP Growth Hubs, and a package for community groups to bid for.  That’s on top of government commitments already made and without doubt more to come on energy bills.

We have to wait for the new PM to announce an emergency budget to tackle Autumn energy bills and that will come. Meanwhile winning this LUF 2 bid for a new and improved Eastgate and Greyfriars would be a big step forward - of investment, jobs and confidence. We’re going to need all those.

In short we need to deliver on LUF1, win LUF2 and work with the private sector for quality new hotels as soon as possible - for the visitor economy, the weddings market at Blackfriars, the business events market and to boost our f&b business around the city. I hope to update you on that before long.

Meanwhile ‘Disappearing Council?' Far from it. I’m proud to work on Regeneration with them - I hope you approve of this bid: and please cross your fingers for Gloucester to succeed.

PS do let me know your reactions and thoughts!