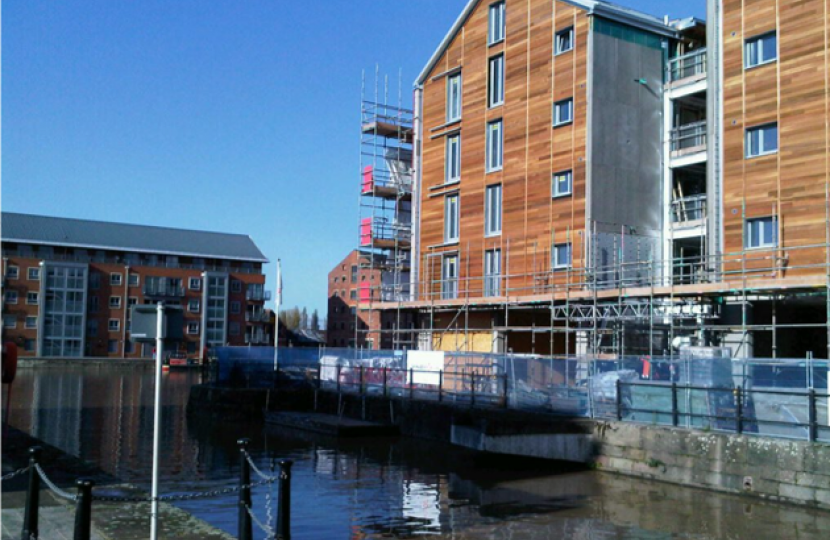 Thank you for your query about the safety of the cladding at Merchants Quay, my understanding of the situation and how I am standing up for my constituents living there.

I totally understand your concerns about cladding and safety: since the dreadful inferno at Grenfell Tower cladding has rightly been a major issue for debate and discussion, and particularly about what is the best way forward to resolve any outstanding issues.

In terms of my involvement and help for constituents, let me briefly go back to the day of the Grenfell Fire in 2017. On that very morning I both e mailed and rang the then Gloucestershire Fire & Rescue Service (GFRS or Glos Fire) Chief (then Stewart Edgar) to ask him to check immediately if there were any such cladding issues at any of our tallest buildings - essentially a cluster of converted warehouses and new pseudo warehouse flats around the Docks, Clapham Court (Kingsholm), the GRH and the (then newly clad) Shire Hall.

He promised to do so and came back within 36 hours in writing:

“..We have zero high-rise buildings with similar cladding (to Grenfell).  Some of the premises in the docks are balcony cladding and Building Control are currently looking into them.  For example, Merchants Quay’s building regulation application took the partial clad into account by building a fire safety solution.”

He reassured me verbally soon after that none of our buildings gave Glos Fire concern about cladding issues.

I have therefore continually stuck to the line that we do not have cladding issues in Gloucester – and in fact it’s worth noting that our highest residential building (Clapham Court) doesn’t have any cladding at all.

However, I was recently challenged on social media about this, and subsequently alerted that the Merchants Quay developer had put in place a waking fire watch. The question was reasonably asked: if there was indeed no problem why the need for a waking watch?

So I contacted the new Fire Chief Mark Preece, who has confirmed that:

a) The information and reassurances I was given in 2017 were correct then:

b) But everyone knows more about cladding materials now, and late last year the government, after detailed analysis of different types of cladding, had funded local fire authorities to take a closer look at roughly 60,000 buildings identified as potential  ‘Buildings At Risk’

c) Glos Fire started inspecting the 42 buildings in Gloucestershire identified as being either over 18 metres or 6 storeys high, of which 24 are in Gloucester. All  these buildings are regularly inspected for fire safety anyway, but specialist consultants have also been brought in to advise on specific cladding analysis for the Buildings At Risk review

d) Merchants Quay is under 18 metres and 5.5 storeys rather than 6 storeys high, so technically outside the scope of the Review, but Glos Fire (rightly in my view) took the view of better safe than sorry and included the building in their scope.

The ‘responsible person’ for the building (usually appointed by the developer and responsible for eg the safety of the building) was required by Glos Fire to complete a suitable risk assessment, and this led to the building owner bringing in an external risk assessor who instigated an EWS (E1) ‘intrusive external wall system inspection’, especially of the ‘timber decking cladding and missing cavity barriers’ on Merchants Quay. On the basis of this risk assessment and EWS inspection the Responsible Person had the option to install an appropriate fire alarm or if unable to do this instigate a temporary Waking Watch. He decided a waking watch be put in place (by the developer) ‘until an interim fire alarm system can be installed’.

Glos Fire Chief Mark Preece has now confirmed that work has started on a permanent new fire alarm system, a 27 day extension has been approved for the completion of the work and that it should be in place before the end of August. That, so far as Glos Fire is concerned, is the only work needed to ensure the safety of the Merchants Quay building and residents.

I do not believe there should be any leaseholder or tenant cost to the fire alam system, and nor does the Gloucester City Council or your three City Councillors Pam Tracey, Dawn Melvin and Paul Toleman. I will write this week to Crest Nicholson for confirmation that this is indeed their position too.

Meanwhile the government has called for the External Wall Survey 1 (‘E1’) requirement to be removed altogether for any building below 18m (which would exclude all buildings in Gloucester except Clapham Court and the GRH), and for greater proportionality of approach to risk.

I believe that we are therefore only about a month away from resolution of the issue, although let’s wait for the fire alarm system to be tested and signed off by Glos Fire before assuming that. But I hope this is reassuring to residents both of Merchants Quay and more widely in The Docks, in relation both to your safety and the value of your leases (or cost of tenancies).

There are of course some lessons from all this.

It was regrettable that GlosFire did not keep me informed of developments, and probably wrong of me to have assumed that the organisation would automatically do so. The new Fire Chief has been very open and confirmed he will keep me in the loop going forward, and he has forwarded a brief at my request to all MPs in Gloucestershire: of course more of these buildings are in Gloucester than anywhere else and some assessments still to be done (the deadline for reporting back to the government is by the end of the year). I will keep my constituents briefed as more updates come in, to ensure that communication is as it should be.

I was also wrong, as it turns out, to assume that what was considered safe in 2017 on cladding would still automatically be considered safe now. However the installation of a fire alarm at zero cost (to be confirmed) is a far step from the (mostly anonymous) and not-from-Gloucester comments on social media keen to imply that Gloucester has a Cladding Crisis, unsafe buildings and about to be bankrupt leaseholders. Quite simply none of that is true.

Meanwhile I’ve asked, and the Fire Chief has agreed, that we both make ourselves available, with the developer and your Councillors, at a meeting with Merchant Quays residents – a chance to combine a short briefing with answering your questions, if you think that would be helpful.

Please do let me know: my instinct is that the timing of this would be best once the Fire Alarm has been successfully tested and approved, so probably one evening in early September.

I’d be grateful too if you would share this mail with other residents of Merchants Quay so they can also feedback their views and concerns direct to me on richard.graham.mp@parliament.uk

I hope this is helpful, and shows my absolute confirmation both to stand up for residents, whatever their situation or concern, investigating issue myself and then communicating back what I’ve learnt.

Please let me know if you have any other questions at this stage.