It’s the largest commercial building in the centre of Gloucester: 215,000 square feet of space that’s been underused for years. It’s also (give or take) a hundred years old, and badly in need of a facelift both in and out. Then the sole tenant goes bankrupt, and the owner – who’s seen their capital value plunge and the rent now come to a dead end – puts it up for sale.

What happened next to Debenhams?
A year ago I discussed this scenario with the City Council’s Regeneration Advisor and how we might do something more creative than wait for a developer to come in and create flats.

Growing Health courses demand..
By chance at the same time the University of Gloucestershire’s Vice Chancellor was thinking about how and where to house their growing public sector skills courses – especially the Health and related courses. Since they successfully applied for pilot project status to offer the new Nursing Associate Higher Apprenticeships that the government introduced a few years ago, the popularity of their Health courses has shot up. In fact applications for jobs in the Health sector across the country rose by a third over the last year alone.

..Health & Care demand can only grow
So our Uni has been on the right track, demand for health and care services is only going to grow and Gloucester has a chance to become a major centre of Health Skills – which will benefit not only our NHS Trusts and the Gloucestershire Royal Hospital (GRH) but ultimately residents, because we need (for example) nurses in GP surgeries, mental health nurses in schools, and increasing skills in the Care sector too. As I wrote years ago, we need more home grown in all aspects of the Health & Care sectors. Getting those skills locally, while living at home, is the key – and that’s what the UoG and GlosCol provide with different courses.

Student accomodation
With the UoG needing more space than they have at their site in Oxstalls, and the city having this enormous space (20,000 square metres in metric terms) at Debenhams, there was an opportunity for them to come into the centre of the city. Of course some years ago both the UoG and Hartpury together developed student accommodation in Blackfriars, but the courses were all in Longlevens (still, at the moment, in Tewkesbury constituency).

Reinventing University buildings...
For me this was a huge opportunity to think both of the Debenhams building in a different way. Forget department stores – their heyday is long gone. The demand for non f&b physical retail has shrunk as online retail has grown. But the value of having large numbers of students studying in the City Centre has grown, because it changes the dynamics of city footfall and the demand for certain goods and services – particularly cafes but also for entertainment and culture. Having large numbers of students there also coincides with work on the £5m regeneration of Kings Square under way, alongside the refurb of the Kings House (next to Wetherspoons) as cultural hub for The Music Works and Jolt projects; and the huge c£80m Reef plc project The Forum (in the old bus station) which has planning approval and is already looking at detailed interest from eg hotel operators. 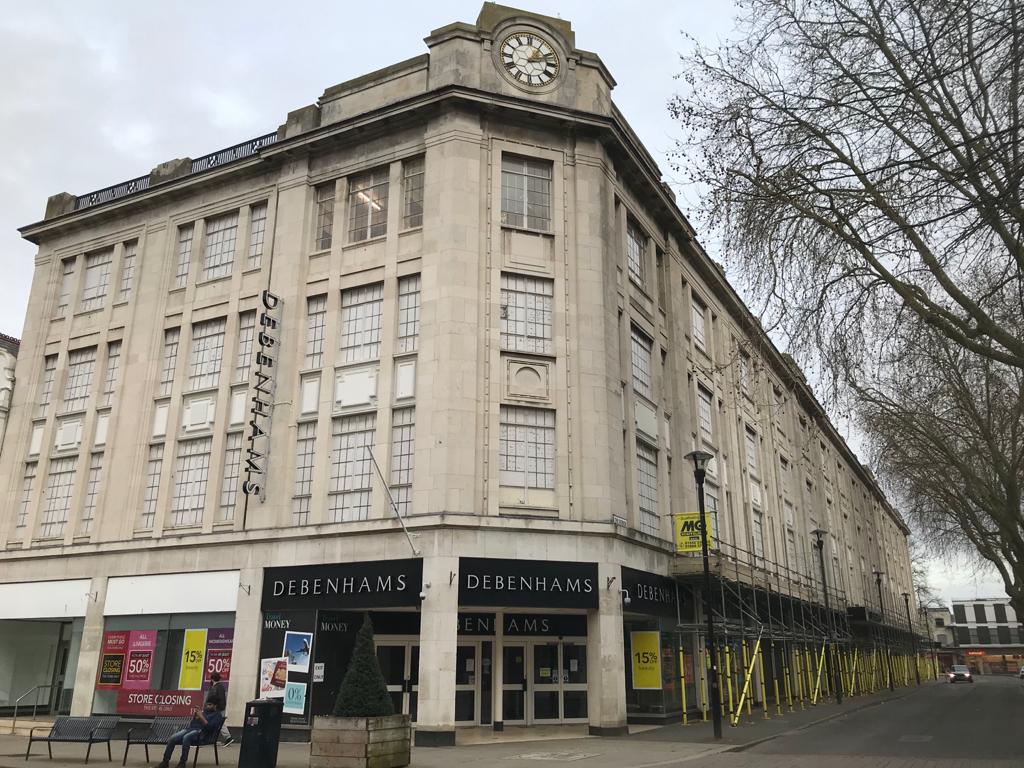 The jigsaw
Suddenly, as Cllr Richard Cook (City Council Leader put it) the pieces in the jigsaw puzzle were falling into place. And our university will make a huge contribution to where they’re based – through an estimated gross value added (GVA) of £7.47 for every £1 spent by the University, on products, services and supported jobs. There will be almost immediate benefits to Gloucester Culture Trust in bids for arts funding, audiences for cultural activity in the new Kings Square and footfall for our shops.

The overall economic value of the UoG can be seen in much more detail through this link to a study done by BIGGAR Economics https://cmsr-web-assets.glos.ac.uk/sites/99/2021/02/12092720/economic-impact-of-the-university-of-gloucestershire.pdf

Getting the bid right..
But the immediate challenge 3 months ago was the bid. No-one here controlled the process or decision by the seller Aviva. So a team was brought together to demonstrate that our bid was of huge value and had the support of the city. Support from Cllr Richard Cook, representing both the planning authority and major landowner around Kings Square, was key. I wrote on behalf of the City to endorse the UoG bid strongly, while the UoG completed a survey and assessment of the state and value of the building. The bid succeeded, Aviva did the right thing as they pulled out of the city, and the legal agreements have now been completed. The building does now belong to the UoG - and will therefore be the first ever conversion of a Debenhams into a centre of university learning before long.

Brave or sensible?
No wonder then, as a new building transfer concept of retail to skills, that some people have reacted by saying (like Sir Humphrey in Yes Minister) ‘how brave’. But I hope they will soon be saying ‘how sensible’ as others turn to similarly creative ideas. Department stores as we’ve got to know them – great inter war American style flagship stores – will have to be reinvented, but it doesn’t have to be flats instead.

A library and Wellbeing facility?
Nor is it just about university students either. In their press release the UoG talk coyly about the ground and basement floors having ‘dual use facilities.. for learning, wellbeing, enterprise and culture’. I hope very much that this building will host a new library, a Wellbeing Centre and a spectacular café overlooking Kings Square as well. The library would replace the current one on Brunswick Rd, which can be taken over by the neighbouring Museum and that space reinvented too. I very much hope that agreements for the Debenhams Building can be reached as soon as possible.

So all credit to Vice Chancellor Stephen Marston for persuading his board of this strategy behind the idea, and then implementing the purchase successfully.

Number crunching time..
A few facts (to the extent that we know them at the moment): there will likely be around 2,000 students and 100 staff there for the university presence, and more of course for the public library/Wellbeing Centre and café. Courses will start here from Sep 2023.

..the underpass..
It’s worth mentioning two other related and important happy coincidences. The first is c £7m improvements around the Railway Station that includes a revamp for the underpass from city centre to Great Western Road. Work starts soon and will also benefiting staff at the GRH, GW Rd residents and future students, walking from Debenhams to the GRH

And Levelling Up
The second is the launch of the government’s Levelling Up Fund. Its criteria suit what we all want here – change and improvement of our city centre: and the government’s need for shovel ready projects. We have plenty of them right here in the Kings Quarter. The UoG bought the building for a bargain, but the refurb cost will be hefty (generating lots of local jobs). So the City Council, the LEP and I will now work on the best possible bid to attract government funds and ensure nothing is delayed

The timing..
Now come the disclaimers. Firstly it will all take time and there’s lot of work to be done. The students won’t be here until 2023. Secondly (as my photos confirm) one side of Debenhams is largely unnoticed (Northgate St), one is handsome (Oxebode) a third (St Aldate St) is inoffensive (and has potential for better use of space at the back): but the Kings Sq side at the moment is gloomy and depressing. I am banking on the UoG improving this by stripping off the paint on the windows, and letting light shine in and out again and generally bringing it back to new life. 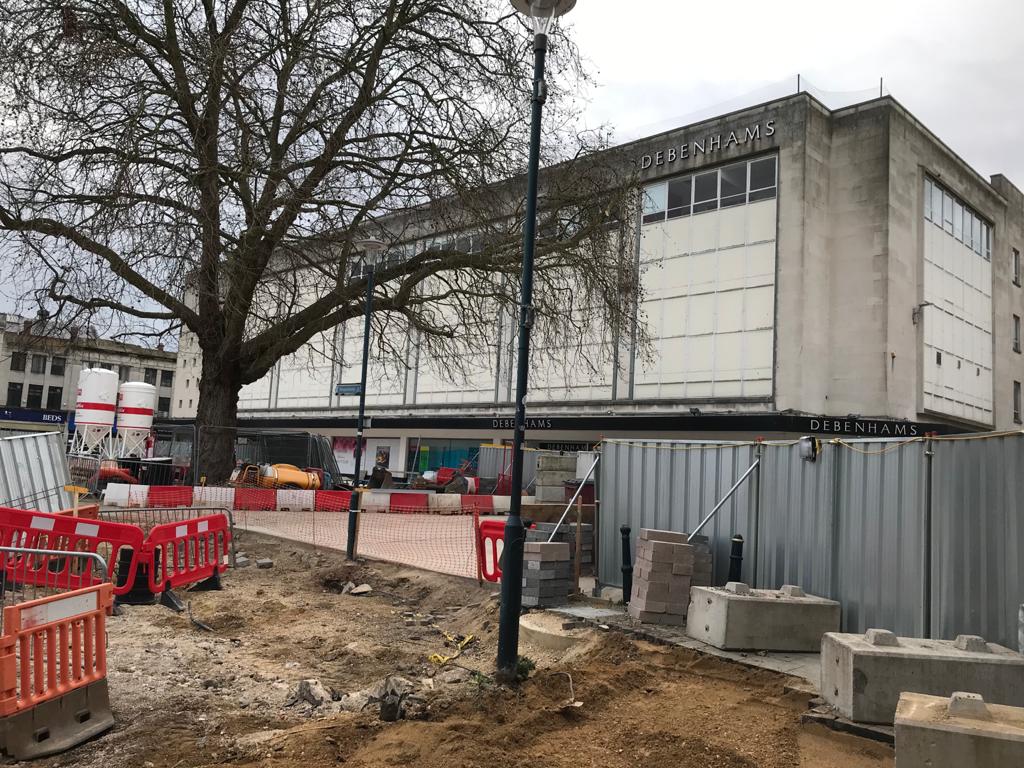 And of course the building needs a new name. Competition time anyone?

I said for the press release that “this great good news will result in large numbers of students getting vital skills in public sector courses in our city centre. After a much need facelift this will be an imaginative use of a grand old building. We can be confident of the future of both the building and the buzz of the city centre”.

But what do others think who’ve only just heard about it?

Ivan Taylor (The Four Gates of Gloucester): “It’s brilliant for the next generation. Having youngsters in the centre of the city is the way for Regeneration to move forward”

Canon Nikki Arthy (Chair Discover de Crypt CIO): “Fantastic and visionary, as we continue to re-imagine buildings and space keeping with people at the heart of planning”

Deborah Potts (CEO The Music Works): “We’re so excited. With our new Music Works as well Kings Square is going to be an amazing and vibrant place for young people”

Ian Mean (ex Editor Western Daily Press & Gloucester Citizen): "Brave and visionary by the University of Gloucestershire. It always needed a presence in the heart of the city with the enthusiasm of students in our streets”

Local resident on social media: “It’s rare that a news item lifts my spirits, but this has really given me hope for the city centre”

Mark Boyce (ex President of the Chamber of Commerce): “I’m over the moon. Absolutely terrific news. I couldn’t imagine better news to wake up to. It’s going to make the City Centre far more vibrant and increase the spending power on the high street”

John Lovell (Secretary Gloucester Civic Trust) “Excellent news! It will bring the focus of Gloucester back into the City Centre with young people at its heart”

The warmth with which this announcement has been received has surprised Stephen Marston.
Ours is not a city known for raving about ourselves: if anything we tend to talk ourselves down. It takes visitors like the last US Ambassador or visiting authors like Michael Wood to be bowled over by  heritage that we take for granted. But on this occasion I sense relief that it really isn’t a case of ‘last one turn off the lights’ about our City Centre, as I described recently on another e news. There is a lot happening. And this has the potential to be something really special, to the relief of my constituents. Let’s have a big hoarding out there –

Under New Direction: Welcome to the University of Gloucestershire in Gloucester

P.S. What do you think of this exciting new project? Let me know on richard.graham.mp@parliament.uk