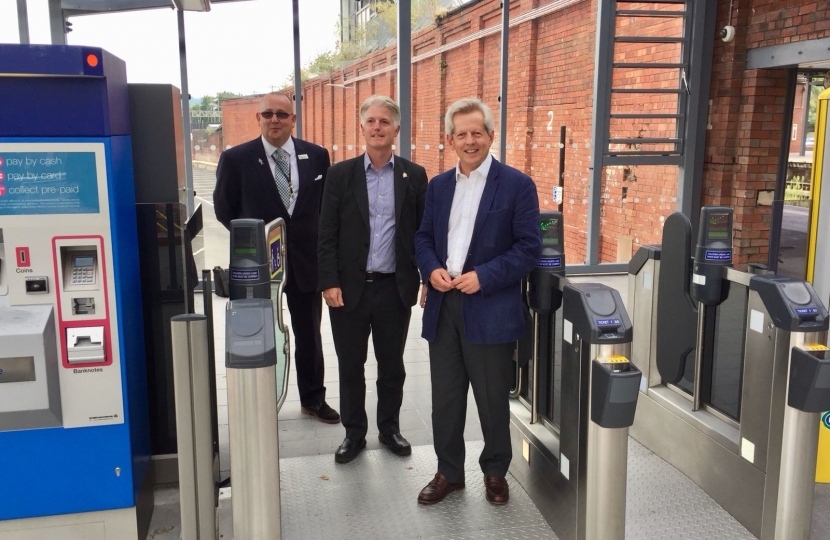 In March 2016 (see HERE) I updated readers on my vision for a greatly improved railway station, with an additional new car park and access to the station from Great Western Road; improved underpass from Bruton Way to Great Western Road, and a new forecourt and exit onto Metz Way from the existing car park.

The first part of this was to be done by Great Western Railways (GWR) and the second funded by Government via our Local Enterprise Partnership (LEP) after our successful bid – as outlined in my e-news of March 2018 (see HERE).

The first part of the work is now completed by GWR, and passengers on platform 4 will see the new entrance and exit facilities that include an electric car charging point, lots more bicycle racks and an extra 220 car parking places. These are also very convenient to anyone working in the GRH or 2gether Trust offices at Pullman Court, and for those living in Hucclecote, Elmbridge, Longlevens, and villages in Tewkesbury or the Forest it will save time getting in and out of the station.

Meanwhile the City Council’s design for everything else at the station including the underpass is out to tender and contracts should be awarded by the start of 2019.

At the same time, my discussions with government and GWR on an additional half hourly service from Gloucester to Bristol vice versa are inching forwards. This would make a huge difference to commuters, some of whom have had a poor experience of current services to Bristol. GWR needs an extra third carriage on every service as soon as possible, and they have promised to source these from London Thames Valley by January 2019.

The cost of rail travel to my constituents continues to rise and I strongly support the idea of reducing both annual increases and wage increases to the CPI not the RPI level of inflation.

Of course all of us want more and better services, and some essential modern improvements like free WiFi, more bike racks etc, and this does need investment.

But the frequent cancellations on Sunday services is not just because of Network Rail work eg on electrification - it’s also because Sunday is not a contracted day of work for drivers. That means they can ring in and just not turn up for work. I believe that train operators and the ASLEF union have to resolve this issue so that people do want to come to Gloucester for a weekend by rail.

Lastly the extra service (one direct and one change at Swindon every 30 minutes) to London Paddington now looks likely to be introduced in May 2019, not the end of this year. Network Rail has delayed this to get the timetabling absolutely right. Although this is frustrating, it’s better to make sure the changes are not poorly implemented.

So things are happening bit by bit. Now we need Network Rail to sort the timetabling for extra services to London, finish the Filton Bank works so we get more CrossCountry trains from North to South, and then GWR to get more carriages – and ultimately more services – from Gloucester to Bristol.