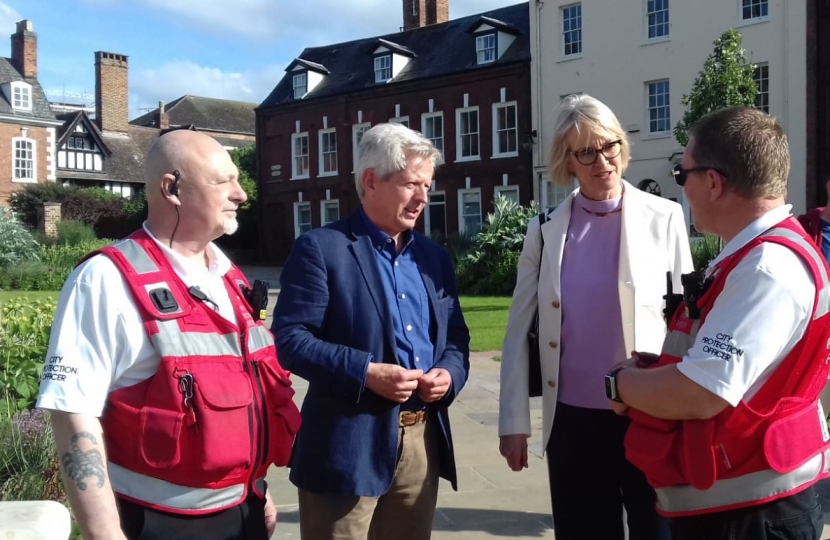 Minister for Digital and the Creative Industries, Margot James MP, has praised Gloucester’s Business Improvement District (BiD), the City Council and the office of the Police and Crime Commissioner for their creation of a team of City Protection Officers (CPOs) to boost safety in Gloucester City Centre.

The Minister was introduced to two of the four-person CPO team by MP Richard Graham on a walking tour of Gloucester City Centre after opening the UK Digital Retail Innovation Centre (UK: DRIC).

Richard explained that BiD city centre businesses clubbed together with the Gloucester City Council a year ago to fund the CPO scheme for three years, and the CPOs use their knowledge of who is doing what where to good effect with the police.

Gloucester's MP said ‘I’m quite sure that the improved situation around Anti-Social Behaviour and rough sleeping is partly down to the CPO input. Trying to measure city centre security just by the number of bobbies on the beat is a mistake: it’s about how different resources - PCs, PCSOs, CPOs, community groups and technology (including but not only CCTV) - work together that makes a difference. The CPOs explained the variety of work they do in detail to Margot.’

Minister Margot James said that most High Street retailers ‘would benefit from digital marketing, promotion and turnover to support their physical presence, but also from exploring whether a BiD and CPOs would make High Street shopping a more hassle-free experience, with a visible local presence on the streets for practical help.’ The Stourbridge MP added that ‘It’s the first time I’ve seen this in action and I was impressed by what I saw and heard. I’m interested in spreading the word because other towns and cities could benefit too.’

Since a proposal first appeared in 2008, Gloucester Conservatives have consistently been against a large development of c3,200 houses stretching from Grange Road down the Whaddon Valley.