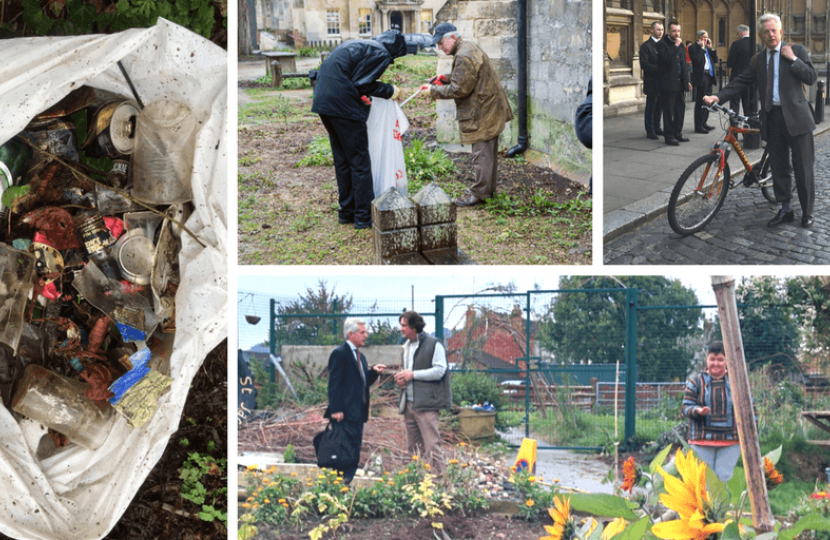 I’ve had many emails effectively asking ‘how green is Gloucester and what more can we do?’ This is a good question not just for me, but for all of us.

So let me share some thoughts and wishes, and seek your views.

1. Recycling: better, but room for improvement
This used to be a delicate issue in Gloucester. Only ten years ago our recycling rate was 21%, but ten years on we’re in a much better position, at 37% and in the top 3rd of local authorities for recycling rates. But the best cities in the UK recycle around 66%, so we can do lots more.

Gloucester City Council has examined our contracts and changed our rubbish pick up lorries. The new trucks will accept more plastic and cardboard and this should increase our recycling. The new service also means 100% of what is collected kerbside is recycled into new products, will save us £250,000 a year and divert 2,000 tonnes of waste from landfill. This is an encouraging start.

2. An additional recycling centre off Eastern Avenue
I believe we could drive up recycling volumes and reduce carbon emissions from journeys to the Hempsted tip by having an extra recycling facility on council land off Eastern Avenue, which would be closer to residents of Barnwood, Hucclecote, Abbey, Robinswood & Matson, Coney Hill, parts of Barton & Tredworth and Tuffley – probably half the city. The site wouldn’t be big enough to handle the full range of recycling at Hempsted, but it could still make a significant difference. Clearly making this financially viable is important.

3. Stopping the landfill at Hempsted
Since 1996 taxpayers have had to pay fines for putting waste into the ground, with Hempsted landfill costing more than £10 million last year. I don’t know anyone who thinks this is a good idea either environmentally or financially. Clearly there were different views about the Waste to Energy plant at Haresfield, but creating energy to power for 25,000 homes, reducing carbon emissions by 40,000 tonnes and stopping lorries from around the county delivering residual waste to landfill in Hempsted are huge benefits to anyone living in Gloucester. Now there is a chance for more creative recycling at Hempsted.

4. Sorting out traffic in the City
The business of air pollution is mostly about car emissions in Gloucester. An idling engine can produce up to twice as much exhaust emissions as an engine in motion. We need to improve our traffic flow in the city centre to combat this, and in particular I want to see the jams in Southgate Street reduced by a proper pedestrian crossing at the CD Rack and a roundabout at the Trier Way/Stroud Road end of Southgate Street to replace the existing cross roads. This would then enable drivers to turn right to the Peel Centre and St Ann’s Bridge, rather than creating more traffic jams going through an absurd triangle around the Stroud and Bristol Roads. Peel has offered financial help and I would like to prioritise the blockages in Southgate Street after the county elections.

5. Progress on a mini-hydro at Llanthony Lock?
Seven years ago I brought the then-Water Minister to Gloucester to hear the Hereford and Gloucestershire Canal Trust’s idea to create a mini hydro at the Llanthony weir, on the edge of Alney Island. As I do, he loved the idea of creating energy from the water so close to the heart of the city centre. This could raise significant income for the Trust (towards buying the land to restore the Canal), but it’s complicated and is taking an age to actually happen. As Vice President of the Canal Trust I have to manage my natural impatience: the long term goal of producing our own natural energy from the River Severn is an attractive one.

6. Getting tough on fly tippers and reducing litter
The most immediate way any city is judged, as with people, is through our appearance. And whether it’s the A38 passing Kingsway towards Cole Avenue, or Metz Way bringing drivers over the Railway Triangle there is far too much rubbish on the side of the road. Some shocking corners have been much improved: I remember standing with the Rygor CEO beside a thick pack of dirty nappies dumped in the Railway triangle some seven years ago. That’s all gone, replaced by their sparkling new building. But there are several roads and streets in our city that could be better.

Our recent Great British Spring Clean did help, I think, because litter picking is for us all, not something to waste taxpayer money employing a council contractor to do more and more of. We can set an example and gradually change attitudes. So I’m grateful to all who joined in (in driving rain), and would love to see more community litter picking.

We also need tougher fines, and we now have them, thanks to the City Council. A maximum fine of £400 should make any resident think twice – but is it enough for those who fly tip commercially? I believe at the very least we should name and shame the frequent large fly tippers.

7. Improving our cycling routes and getting more people to use them
Apart from the benefits of a fabulous hill (Robinswood) in our city, and the HQ of the Gloucestershire Wildlife Trust there, we also have a canal whose tow path leads from the Docks to the Pilot Inn, on the Quedgeley/Stroud border. It’s a wonderful, idle 25 minute bike ride but not all of it is in a condition for, say, young children. I’ve met with the Canal and River Trust to get upgrading this path on their agenda, and this remains something to see through.

Likewise ensuring an upgrade for the cycle path through Alney Island to Maisemore and Over after it was blocked when flooding rotted one of the connecting bridges. The GCC has promised to fund sorting this later this year, which is good news. These are great scenic routes that I want everyone to explore and enjoy, and use their bikes much more this summer.

Of course there are other cycle routes which occasionally also need improvement, and I hope cyclists will take photos of any issues and mail them to me so I can forward them as appropriate. But some things again can be done by us as individuals. I often carry a pair of secateurs to deal with e.g. sudden growth on a bramble bush; as so often action by individuals and community groups can complement what councils do, so we can focus them on the most serious issues.

8. Community Groups leading the way
Community groups like the Friends of Alney Island, Robinswood Hill, Saintbridge Pond, Gloucester Park, KGV Park, Hillview Gardens and Barnwood Arboretum who all take real ownership of their area are making a huge difference. I would recommend joining them to everyone living nearby. The group planning to bring the Matson Angling Pond back to life are also showing great initiative so do support them too!

9. What else?
The environment is a huge subject, and everyone will have their different take on it. Dog poo, fly tipping and litter are incredibly irritating things and I get plenty of emails on all three. But I also hope that my constituents will keep a sense of adventure, and discover new walks – like the new balancing pond created off the ring road between the Elmbridge Court and C&G roundabouts – a wonderful place to see waterbird life. This also shows that measures taken for one purpose (successfully protecting Longlevens and Elmbridge residents from flooding) have great spin off benefits.

There is so much to encourage: the land around the Boating Park in Westgate is fun for dogs and children and could be much more: and every child should have the chance to see a sunset and the snaking silver river from the top of Robinswood Park, and explore its Jurassic rocks. There is so much to enjoy in our city.

What else do you think we could do to make Gloucester more environmentally friendly? Let me know via the form on the Contact page.