"This is a coming of age," he said. "Seven years after launching the Gloucester History Festival, and with almost 16,000 people coming last year to visit buildings, listen to talks and join music concerts or tours, we now have the right structure and governance to make this Festival a long term pillar of the city calendar."

Richard paid tribute to the help given by the Trust's advisor Donna Renney, the City Council and all the organisations and sponsors involved in the Festival. "We wouldn't be here without a strong spirit of partnership', he said. "And this will increase, as agreed with Great Places funding, as we grow the City Voices programme, hold more outreach events outside Gloucester and use all parts of Blackfriars more."

The main Gloucester History Festival in 2018 takes place over the first two weeks of September but Festival Manager Mhairi Smith confirmed that a special weekend festival to celebrate the life and achievements of Æthelflæd, the Queen of Mercia (pictured right), would be held on the weekend of the 9-10 June. There will be a day of fascinating talks at Blackfriars Priory, Gloucester on Sunday 10 June including historian and broadcaster Janina Ramirez, archaeologist Carolyn Heighway and historian Michael Hare who are exploring St Oswald's Priory. To sign up for more information on this event and all History Festival news please email admin@gloucesterhistoryfestival.co.uk

Festival Manager Mhairi Smith said: "We are very excited to be working with our partners Marketing Gloucester, Gloucester Museums, Gloucester City Council, Great Places and The Civic Trust on a wonderful Anglo Saxon festival for the city in June. The main History Festival will be returning from 1 - 16 September this year."

The curator of the Blackfriars Talks, Sarah Smyth, said the Trust had decided on the overarching themes of Women and Leadership for this year's Talks. 'We'll be celebrating the anniversary of Æthelflæd and the centenary of women getting the right to vote in 1918, and exploring the fascinating roles women have played throughout history," she said. "We'll have leading authors, historians and lots of other brilliant speakers on local, national and international issues in the unbeatable setting of Blackfriars."

Richard Graham MP summarised the Gloucester History Festival in 2018 as "Bigger, better organised, better facilities and reaching out to more people across Gloucestershire to be involved. Keep the first fortnight of September free!"

The CIO are currently looking for trustees to join the history festival trust - especially those with experience in: I.T., websites, legal knowledge, financial, festivals and education. Anyone interested is asked to contact Mhairi Smith on Mhairi.smith@gloucester.gov.uk 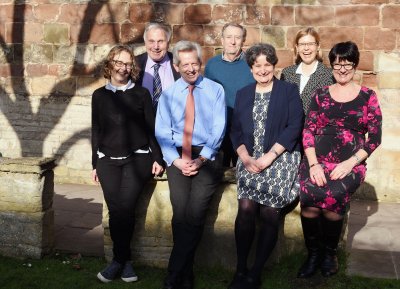