Cycling is back. You can see lots more people on their bikes around Gloucester – including our own Town Crier Alan Myatt, who hasn’t had the best of health for some time, and is loving it. He’s lost weight and looks well on it, and what’s good enough for Alan should be good enough for all my constituents.

It’s especially a joy to cycle at the moment because although there are more cars than ten days ago, roads are still far emptier than usual – and who knows they may still be that way for a while.  So here’s a quick round up of where to get bikes in Gloucester: my favourite cycling routes (with two historical gems on the way) - and one potential opportunity ahead.

Where to start if you’re not already on your bike? The good news is that everyone working in cycle shops are key workers, and you can visit them (socially distancing and Staying Safe). One good place to start before doing so is the website of cycling charity Sustrans https://www.sustrans.org.uk/ It’s a useful guide you to offers on bikes, repairs, and equipment to help you find what you need to travel for work, exercise or pleasure (mostly the same of course, but not always...).

As with cars it all depends what you need, want and can afford. I belong to the ‘if it gets you there what more do you need’ or cheap and cheerful category. Sadly the excellent Kingsholm Bikes, £25 source of my ancient Cherry & White Raleigh (well the cherry and white was painted later, and is peeling off now: Lockdown task repaint?), has been replaced by an upmarket bar busy when Gloucester Rugby returns to action.

But my latest (second hand) bike made by Trek (and known in the family as T Rex) is from a shop going strong: Mitchells at 260 Barton St (just beyond Sainsburys on the other side of the road if coming from the city centre). T Rex is not at all like the dinosaur: she’s lighter and better then Cherry & White, helpfully you don’t need a complicated key to adjust the saddle and it cost £100. Steve and the others at Mitchells there are very friendly and helpful, they have a few (well locked up) second hand bikes in the yard, and a good range of not too expensive new bikes. If you want a useful ‘bike briefcase’ to clip on the back of your bike they have a few of these too. One thing to consider: T Rex doesn’t have mudguards, and while that makes her faster, you can get muddy when it’s raining. If you’re using your bike in your work clothes you may want mudguards..

For a more upmarket new bike, able to whizz up to say Morrisons in Abbey in about 12 mins from the City Centre, or a more exotic electric bike that will sail up Birdlip Hill without any effort from you, then head for Eastgate Cycles (76 Eastgate St, opposite Norvilles the specs maker). There isn’t much boss Graham doesn’t know about bikes, and he has useful lights and other accessories. They service bikes well too: I had a new and smart wheel on Cherry & White after about a decade from them. Caution: electric bikes can cost more than second hand cars. Not saying they’re not worth it, but just FYI.

The biggest one stop cycle shop is inevitably part of a national chain: Halfords on 210 Eastern Avenue, close to Mike Warner’s car showroom.  Masses of bikes, equipment, accessories and clothes, all the ghastly lycra that my son likes, lots of helmets (check you get the right size if buying one) and several people who know about bikes. Not quite the personal service you get at smaller shops but prices are competitive and if you live that side of eastern Avenue (Abbey, Barnwood & Hucclecote) then convenient.

The one shop in Gloucester I found online that I haven’t been to is Kingsway Bikes (Holbeach Drive, GL2 2 BF). No-one answered the telephone when I rang (07738 877111), and their FB page suggests they’re closed at the moment. But for cyclists in the Quedgeley / Kingsway area this is a great addition to services in your part of our city, and stocks purely second hand bikes, so it sounds my sort of place.

Last but by no means least is the Gloucestershire Bike Project charity (16 Commercial Rd, almost opposite the Soldiers of Glos Museum and backing onto Blackfriars). They’ve given 70 (free) bikes to NHS workers to help them get to work now that some public transport is not so frequently available. Manager Maureen (Mo) is a great star and always happy to receive old bikes that need repair by her team, which includes vulnerable young adults, to be given or sold on. They also run bike safety events and adult workshops, so a good place for families getting into cycling for the first time. 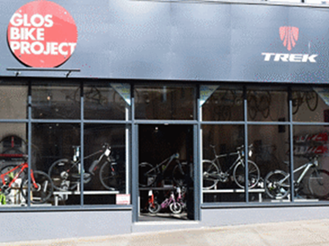 Whichever shop you buy from and use for servicing use the main thing is to get on your bike (and have your own pump). One lovely and safe place for young children to cycle around, while soaking in some of Gloucester’s regeneration and history is Llanthony Priory. Children can do circuits from off the towpath around the new paths and spaces very safely, and then discover on the various boards which Kings & Queens have visited Llanthony and what happened to Humpty Dumpty during the Civil War. The gardens are looking great and although the buildings are closed at the moment, you can see who carved his name into the door of the Victorian farmhouse a long time ago. Great place to do a family quiz using the info on the boards too (More on https:/llanthonysecunda.org). 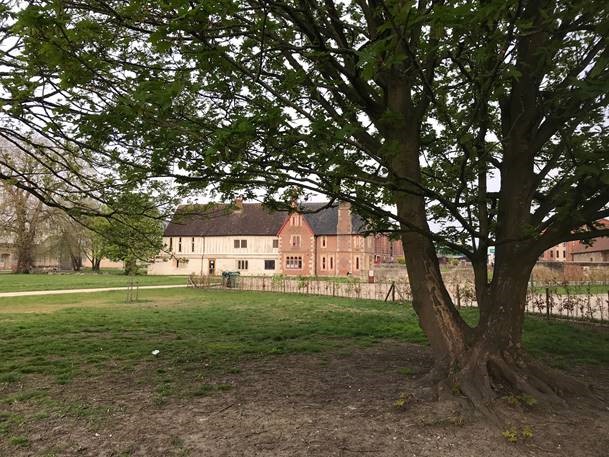 For cyclists with a bit of stamina the canal side journey from GlosCol to the bridge beside the Pilot Inn at Hardwicke (sadly closed) is a perfect 30-40 min ride, and thanks to generous help from various organisations I approached, including the County Council, this route has been improved pretty well all the way along. There is one steepish little hill on the Hempsted section where a child might need to get off, but otherwise in the right weather this is one joyride everyone should do (allow 40 mins if going steadily).

A personal favourite at this time of year, a good weekend trip is through Alney Island’s water meadows, the Gloucester cattle there, to Maisemore. This is part of Route 41 (see the www.sustrans.org.uk website again). If you can stop to walk up the 18th century Thomas Telford bridge, one of Gloucester’s and English Heritage’s jewels. The best place to admire (and photograph) it is under the A40 bridge, which can be muddy after rain. You then cycle beside meadows of cow parsley. In happier times cross the sometimes busy road after the bridge at Maisemore (on the opposite side is a cross that once sat on St Michael’s church, Southgate St) and reward yourself with a drink at the White Horse. Not re-opened for a while though.

Elsewhere there are good routes to explore through Abbeymead and Abbeydale, and a great route from the side of the Barnwood Sainsburys that takes you over Eastern Avenue and all along and through Elmbridge, back into the city centre very easily. Of course there are a few potholes on the main roads (although the Painswick Rd end of Barton St is a joy now), so do photograph the worst ones and report them to Highways via www.gloucestershire.gov.uk/reportit and copy it to me.

Meanwhile Transport Secretary Grant Shapps announced last week a (national) £2 billion boost for additional cycling and pedestrian routes and solutions. This is to boost different ways of getting to work after Lockdown. I messaged to alert him that work on the Gloucester-Cheltenham cycleway had been paused while waiting for funding approval. Both Cheltenham MP Alex Chalk (on his foldaway bike) and I are keen cyclists, and I believe the scheme could be a good improvement to the cycling link between the two centres of our county. So we’ll see whether it stacks up against no doubt competitive pitches from elsewhere.

Happy travelling – and do let me know your favourite routes in and around Gloucester on richard.graham.mp@parliament.uk! 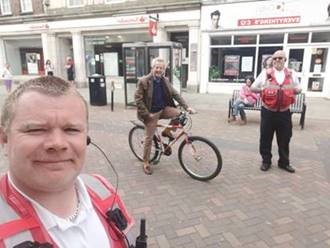 With City Protection Officers Mike and Paul, who are helping to keep the peace in Gloucester City Centre

Richard Graham is looking for his next apprentice

I'm looking for my next apprentice! It's a wonderful role with a Level 3 Business admin qualification to achieve, and masses of experience to be gained in a small and friendly office.