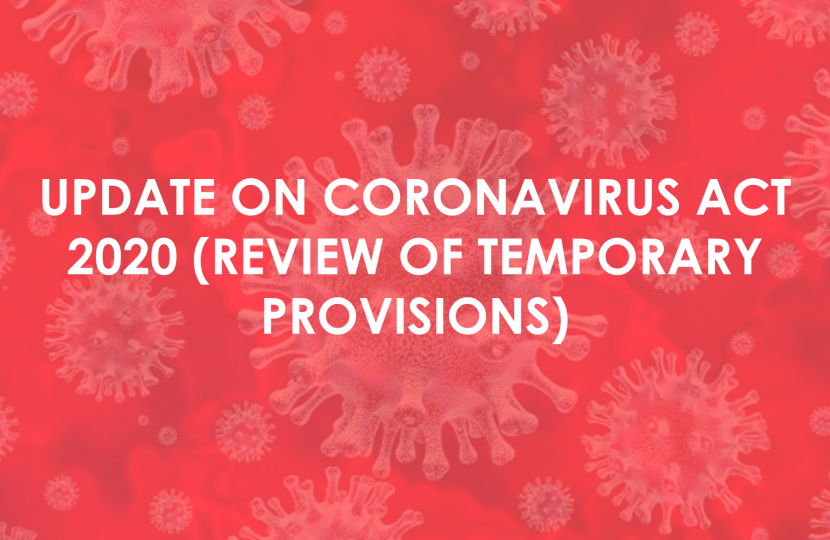 This pandemic has forced the government to take deeply unconservative action in restricting civil and individual liberties, nationalising huge chunks of private sector salaries and several industries: preventing spectators from watching sport except digitally, spending and borrowing vast sums of taxpayer funds and introducing rules that none of us would ever normally want to.

So I can absolutely promise you that this goes completely against the PM’s and my grain.

100 years ago we know the ‘Spanish’ flu killed more people than the First World War. In 2019 I do not believe it was ever a serious option for any country just to allow the pandemic to run its course with no restrictions and a survival of the fittest approach. (The much vaunted Swedish model never went as far as that and is not without problems or criticism either).

Our country would not have accepted the inevitable scenes that would have followed at hospitals, mortuaries and elsewhere.

And therefore the government, with its responsibilities for lives, had to order emergency legislation to control and delay the impact until either fast mass testing or an effective vaccine was in place.

That case is still valid now, even as we draw closer to the potential for both to be realised (and have already carried out 20 million tests, more than anywhere else in Europe by a long mile).

These measures are temporary and if they can be relaxed earlier than the six month extension I know they will be.

But equally I recognise the huge implications for livelihoods. The hospitality and events sector for example is already in deep trouble: aerospace, aviation and travel likewise; and the implications for all winter sports that depend on gate revenue are potentially catastrophic. I continue to talk to key members of the government on ways to help.

We face, like everywhere, a crisis of winter unemployment and I have been working for the last three months on ways to mitigate this in our city and county (see glosliftoff.co.uk).

The government must go on finding ways of preventing widespread bankruptcies and creating jobs until next Spring, by which time hope our scientists will have provided the means to protect everyone, and life goes back more or less to normal.

Meanwhile the purpose of the legislation is to ensure that sufficient staff are available, and deployed where most needed, as well as supporting members of the public, containing and slowing the virus, and managing the deceased with respect and dignity.

Local authorities will still be expected to do as much as they can to comply with their duties to meet needs during this period, and the legislation does not remove the duty of care towards an individual's risk of serious neglect or harm.

So I hope it’s clear that I’d love the Emergency Measures to end now. But that isn’t a sensible option until we can see infections shrinking rapidly again. If we stick to the rules set out this will help prevent both second national lockdown and local lockdown, neither of which we want in Gloucester.

Tomorrow we vote on the extension of the Emergency Act, and I hope the government will agree that if it wants to propose any further national closure then there will need to be a debate and a vote in advance.

All MPs must balance our responsibilities between protecting lives and livelihoods carefully, and Parliament is sovereign.

How are we doing on vaccination?

Do see my enews on 'How are we doing on vaccination?'