City of refuge, then and now

City of refuge, then and now

Twice in a fortnight I’ve been taken back over 80 years to the sadness and the resilience of the Second World War, with new links still being uncovered. And this isn’t just of historical interest, for the links are even stronger to what I and my office do every day of the year. For the work of helping someone seeking refuge never stops, and never will do.

Let’s start with the new plaque on 18 Alexandra Rd in Kingsholm, where in June 1939 ten boys from the Kindertransport programme arrived in Gloucester. Helped by the Gloucester Association for Aiding Refugees (GAAR), who arranged for a Czechoslovakian couple to come and run the hostel, the boys stayed here until December 1943 when they were taken in by families. All were given education, training and jobs: some later moved and some stayed on. 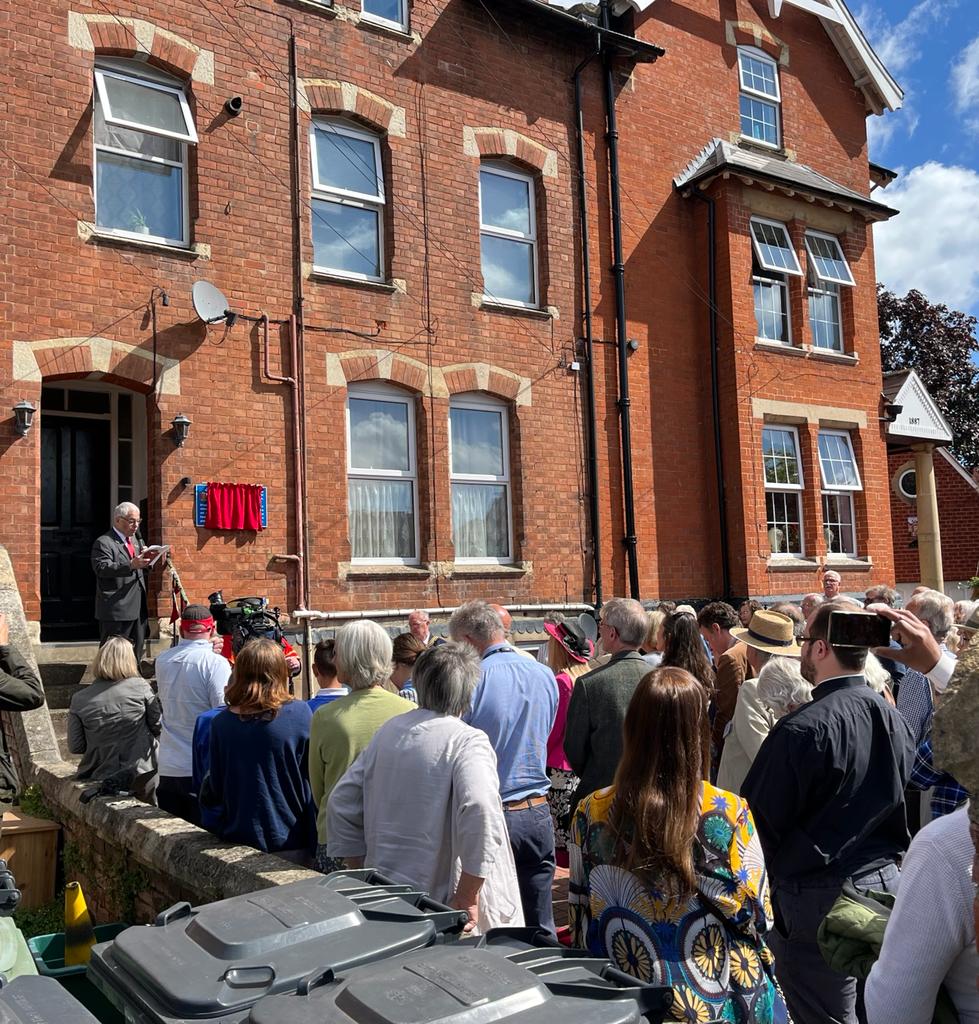 The installation of a new historical plaque at 18 Alexandra Rd, commemorating the 10 Kindertransport boys looked after by GAAR.

One of them, Werner Zorek, moved to the USA but the memories, stories and kindness stayed with him, and it is his son Michael Zorek who came first here for the 90th anniversary in 2019 and has been the driving force for the plaque – which he opened on the 83rd anniversary of the arrival of his father and the other young refugees. 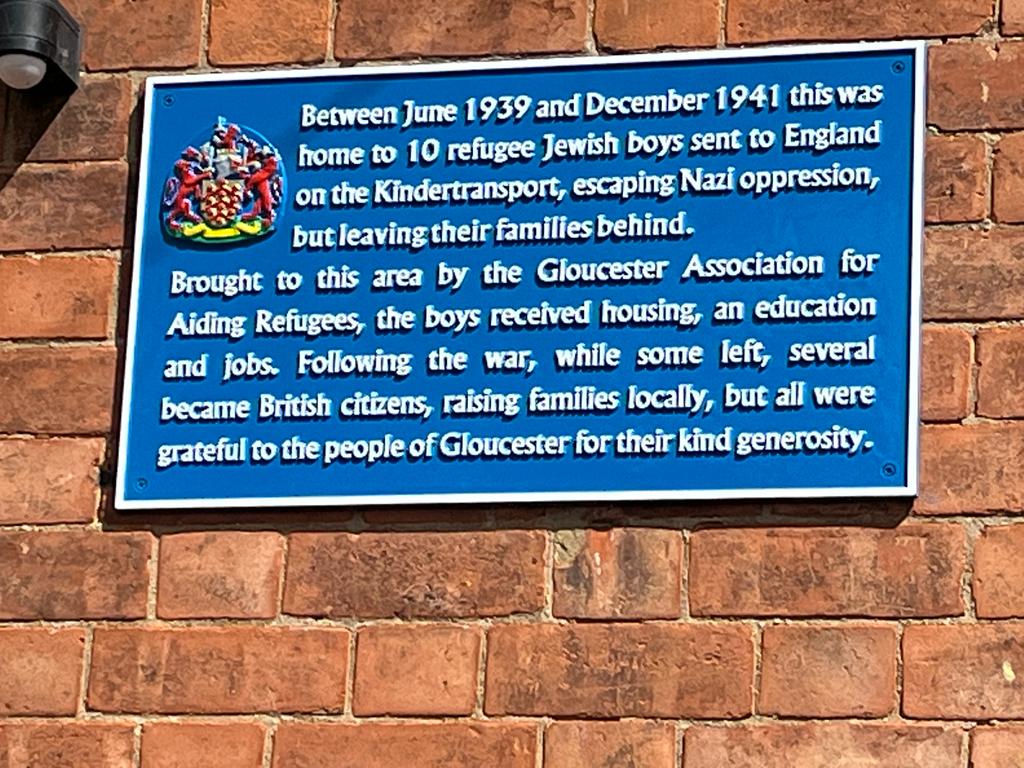 The plaque, unveiled by Michael Zorek, son of one of the children (Werner Zorek) on the 83rd anniversary of the Kindertransport that saw 10,000 Jewish children taken into safety from Europe.

Many in the audience a few weeks ago for the plaque installation had links to that generation of Jewish refugees fleeing from the Nazis, like Sue Oppenheim, once of the City Council, whose father came then. Some are still with us - like Pastor Courtenay Harris, adopted by a family of that name in Winchcombe as a three year old orphan. He served our army before the church and still serves the community there with pastoral care today, aged 87. 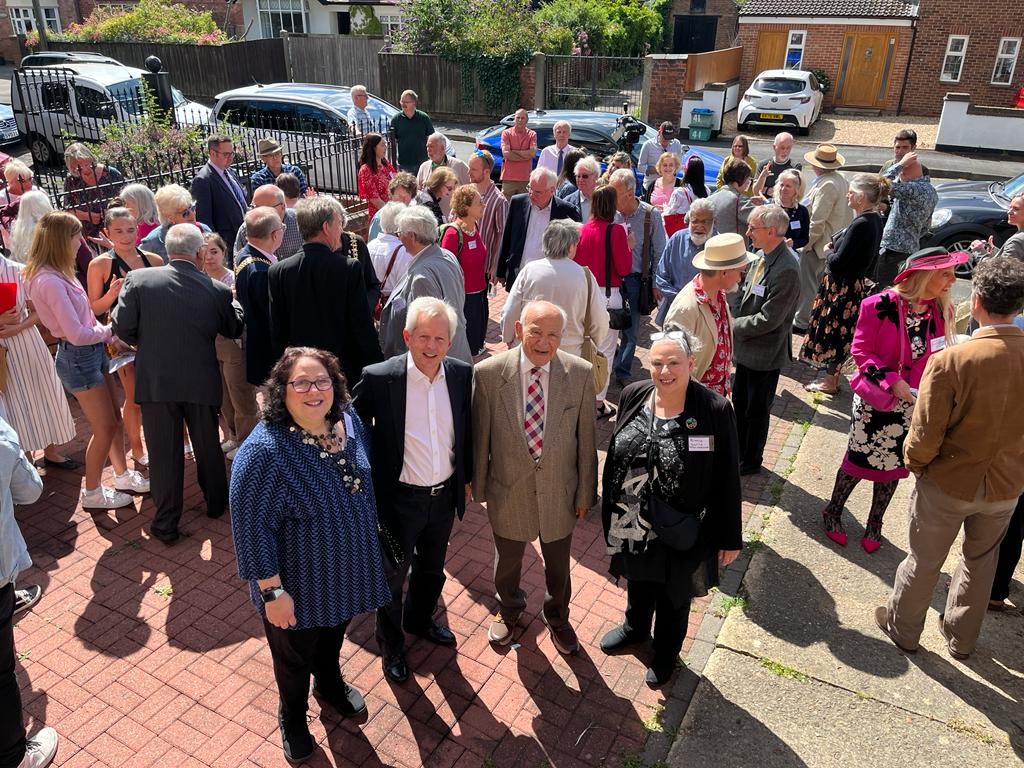 With Michael Zorek’s sister Jennifer Zorek-Pressman and Pastor Courtenay Harris, one of the Kindertransport children adopted in Winchcombe aged 3. He served in the British Army and is still preaching and caring today.

On the other side of our city, not long after on Armed Forces Day, the Akadamia Polska or Polish School has moved premises into Kingsway School. The site is only a few hundred yards from the Officers Mess of the former RAF Quedgeley, and the school’s ‘houses’ are named after various aircraft types, including Spitfire. So the renaming of the school after the Polish WW2 Wing Commander Piotr Laguna was particularly appropriate. His son Jan Laguna, only aged one when his father was shot down, had travelled from Australia to open the renamed school. 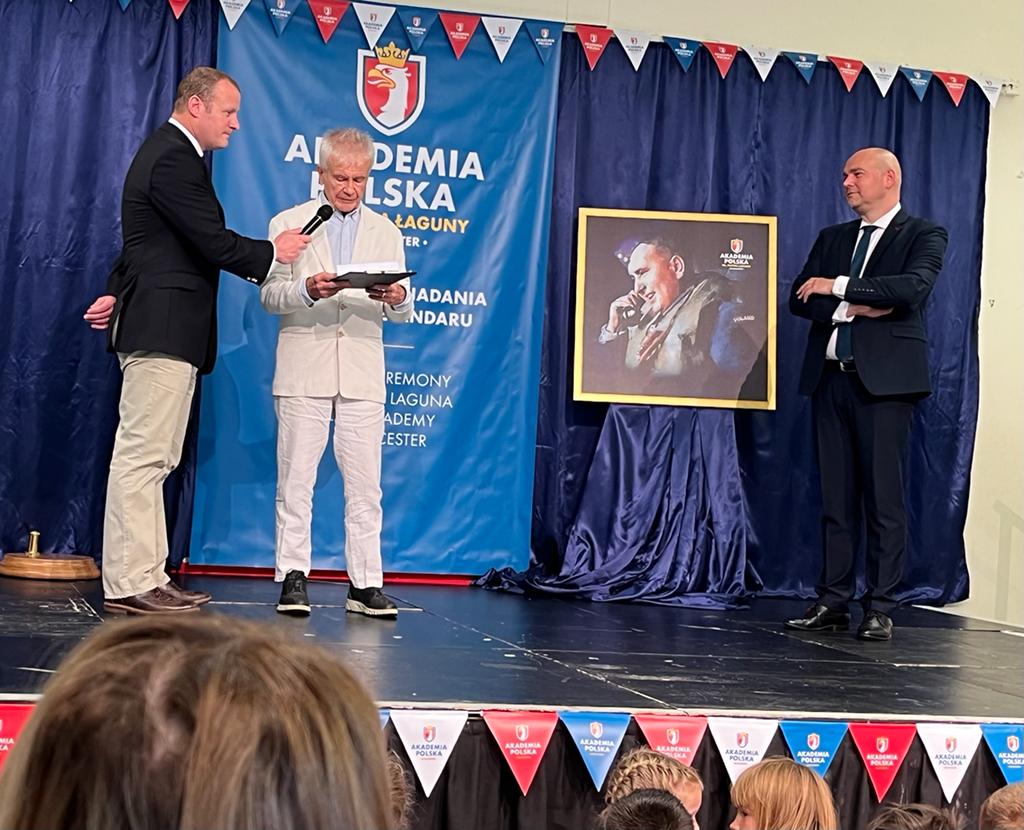 Jan Laguna with Scott Booth, the former Gloucester based Royal Marine who found and is organising the rebuilding of Laguna’s Spitfire.

We were all updated on the find of his father’s Spitfire (where he was shot down in Northern France, 1941) by Gloucester resident and former Royal Marine Scott Booth. Scott has launched a campaign to rebuild the ‘Laguna’ Spitfire and progress is good. And although the Spitfire wasn’t built in Gloucester – the factory at Hucclecote never built Spitfires – his earlier Hurricane in 302 City of Posnam squadron almost certainly was. 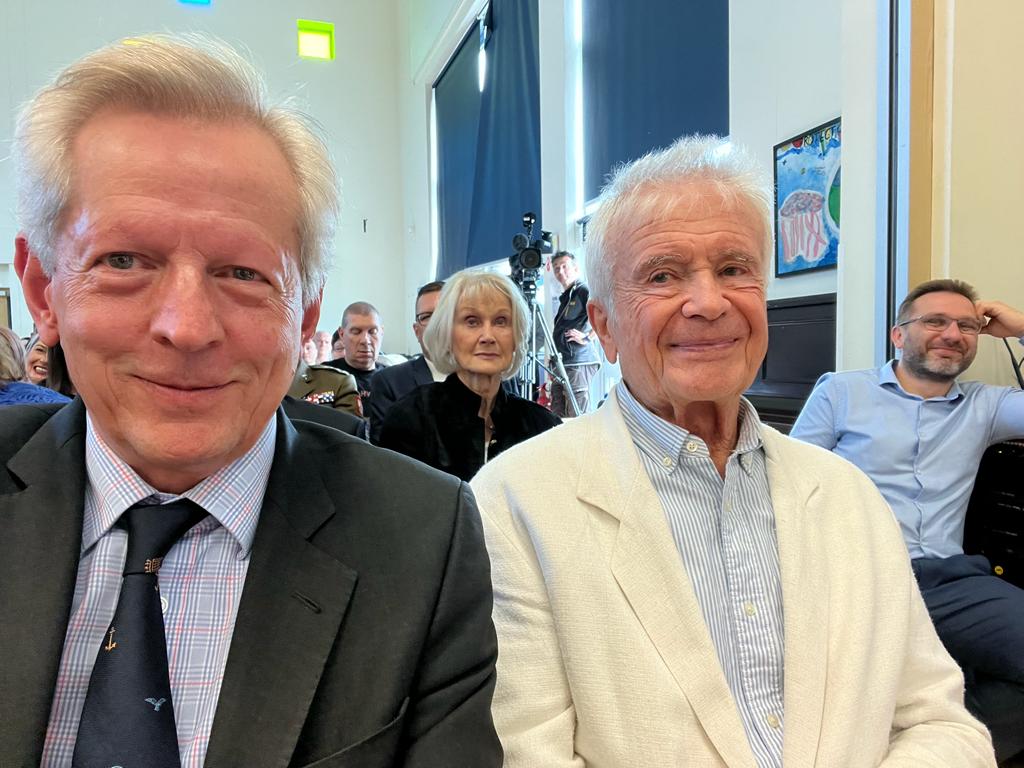 With Jan Laguna, son of Wing Commander Piotr Laguna, after whom the Akademia Polska has been renamed.

Perhaps most movingly Jan also met the son and daughter of his father’s best RAF English friend – Andrew and Penny Thomson, who had with them the elephant on wheels and teddy bear given to them as small children by the Wing Commander the Christmas before he was shot down and killed. Jan had never seen these ancient, much loved toys before: he was only aged 1 when his father was killed, and so this was a deeply moving moment for him. 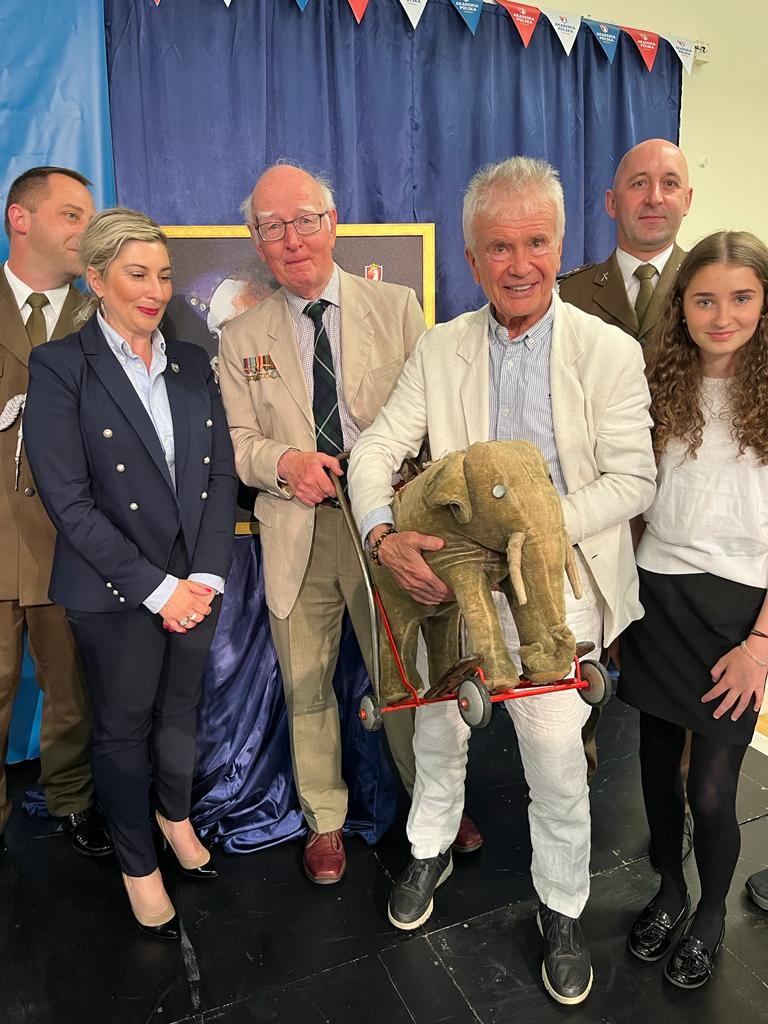 Jan meets Andrew Thomson of his father’s best RAF friend, to whom Laguna gave an elephant on wheels at his last Christmas in 1940. Jan (aged 1 at the time) had never seen the elephant, last memory of the father he didn’t know, before.

Those echoes from the past live on: the Polish Academy in Gloucester celebrates and serves a modern community contributing hugely to modern Gloucester, and an annual Polish Heritage Day, organised by Cllr Jaro Kubaszczyk. The UK Polish links of war then are relevant to our partnership in NATO today grappling with the invasion of Ukraine. Laguna’s name brings ancient to modern, while there are still children, an elephant and a teddy to make the link,

The memory of the Kindertransport lives on too, and Michael Zorek rightly linked his father’s plight to those of other refugees and asylum seekers today: whether streaming out of Afghanistan last summer or from Ukraine since February this year. The list of troubled nations grows not shrinks at the moment, and the echoes are in our city, Widden School’s almost 50 nationalities and two hotels full of asylum seekers. 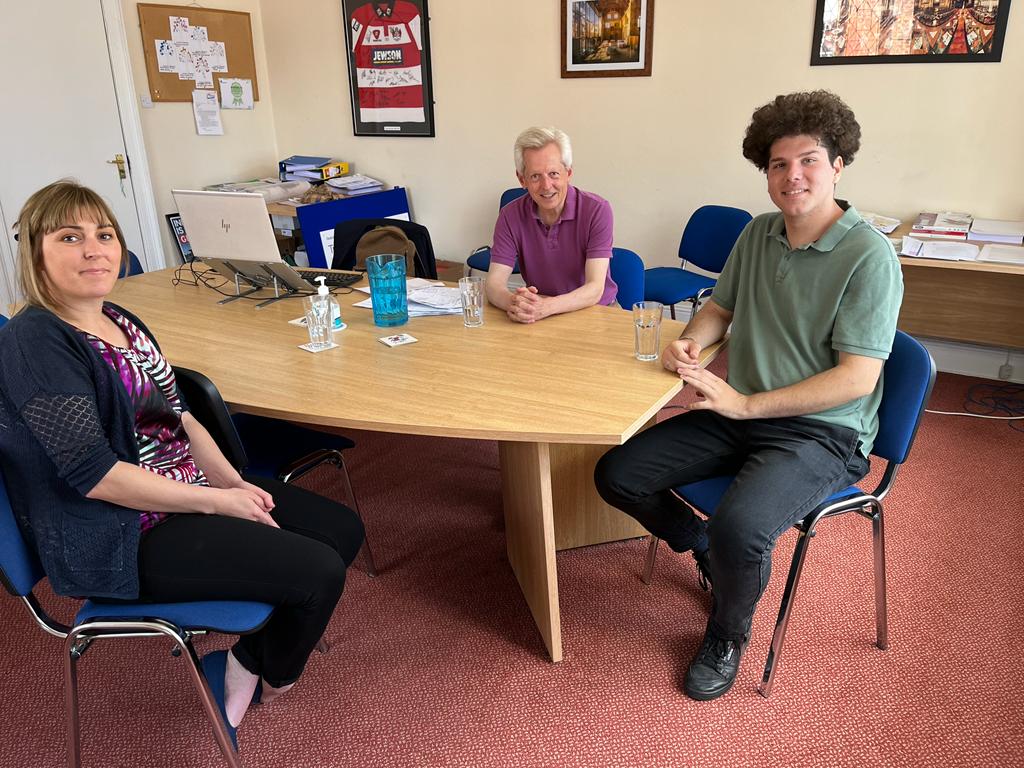 Meeting Nima, 16 year old Iranian Christian asylum seeker, with my caseworker Emma. “Everything is possible in Britain” Nima said as he pushes for GCSE studies in English & Maths.

In my office we are currently taking on a significant new immigration case at a rate of more than one every day. The decisions being made by the Home Office are literally life changing: and are often the most rewarding and saddest work any MP can be involved in.

This afternoon I talked with a young Iranian christian Nima, whom GARAS (descendant of GAAR in WW2), the County Council Education team and us are helping with documentation and access to get him into school for GCSEs this autumn. Nima said ”anything is possible in this country”, something an Afghan refugee had earlier today also said to me - that sense of the UK as both refuge and opportunity, like Michael Zorek's father who “spent his life giving back because he was given an opportunity”. There are many here who feel like that – refugees from Uganda, Sri Lanka and many other countries.

So there is a link between those who came pre or during WW2, as children or as pilots, and to all coming to this City of Compassion today. When pupils at Kingsholm CofE Primary School are learning about the Kindertransport children of yesterday, it’s a story repeated in different ways.

And it’s our duty do our best – hoping that our new neighbours will in time give back – and conscious that if ever something went badly wrong here, we too would need help every bit as much as today’s bombed out refugees from Ukraine. In thanking GARAS and volunteers here, the Ukrainian church, club and community and many more. One day it could be our turn to need the spirit of ‘love thy neighbour’.

We learn about the past to understand the present, and inform the future. Everyone here is part of our legacy.