All change at Gloucester Station 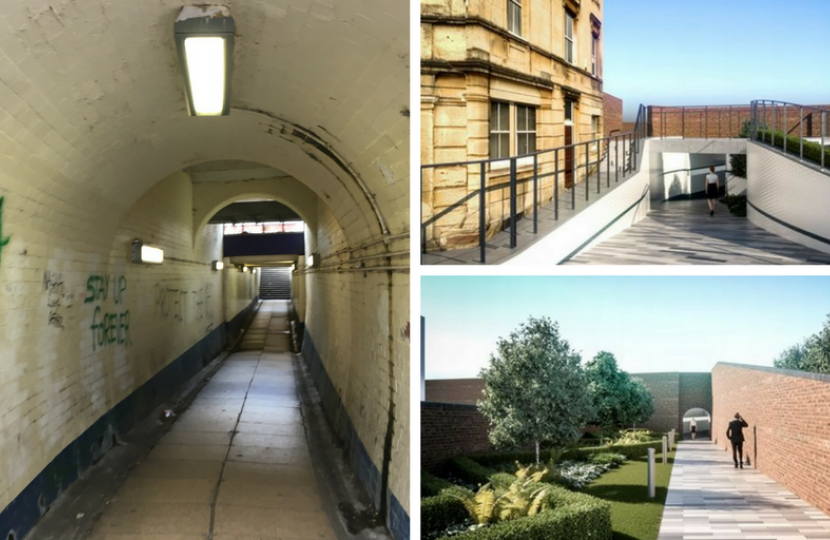 Some things, when you want to improve a city, turn out to be surprisingly awkward. The temptation is to focus on easier goals - after all the electoral cycle is quite short. But I believe in persistence. This e-news is about changes at our train station, including the underpass for pedestrians.

Let me give a bit of background first. In early 2007 I started walking and cycling all over Gloucester, making a list of things that needed improvement. There was the overgrown Railway Triangle (now a light industrial park), the abandoned Provender Mill and Bakers Quay (new flats, hotel and restaurant well under way), an acre of weeds on Bristol Road (now Aldi), twenty six acres of empty and contaminated land on Bristol Road (ex Contract Chemicals, now Matthews Homes), the damaged (now renovated) athletics track, Black Dog Way (now housing under way), the empty (now under development) ex-Norvilles factory in Tredworth and so on. It was a pretty long list.

One of the oddities was the underpass below the train tracks that’s a short cut from our train or bus station to the GRH Hospital on Great Western Road. Why do we have an underpass with a steep flight of steps up and then another immediately down, making the journey impossible for mobility scooters and much harder for pushchairs and cycles? I wanted then, and still want now, a flat, easily accessible, friendly, attractive and well lit corridor for the thousands of people who use the underpass, many of them patients or visitors getting from bus station to the Hospital, or staff getting to work and back. Others are residents going shopping in the city centre.

So this is not about making a difference to buildings for themselves – important though that is to how a city looks – but transforming buildings, stations, car parks or underpasses that can make a difference to people’s lives. We have to solve issues about ownership, insurance liability and risks to neighbouring buildings: find the money and get it done.

There are similar issues around the train station car park. Why sit in a traffic jam to get out of the station car park, turn sharp left on Bruton Way, and left again (through two sets of traffic lights) onto Metz Way (taking over 20 minutes at peak times) – when a new exit straight out of the car park onto Metz Way could be arranged, taking only a few seconds? The current set up is bad for traffic, air pollution, productivity (and even road rage). Where the underpass will help pedestrians and those who use the bus, a new car park exit would help many in cars.

And then there’s the station exterior and forecourt, which let’s just agree is not perfectly welcoming or very well laid out. Stations matter to tourists and travellers. You can have the best Heritage in the world, but if the transport and station is off-putting then they won’t come in the numbers you hope for.

So we also have to improve the overall layout and feel of the forecourt, and the look of the station. For years I’ve badgered local government, the Local Enterprise Partnership (LEP), Great Western Rail (GWR) and the Ministry of Transport to help fund changes. In the 2015 General Election campaign I called for “a better forecourt, facade, car parks and traffic systems, a better connection to the new bus station and a much improved underpass” by 2020. And I pledged in that election that “my plans will also lead to an improved railway station with access from Great Western Road and a safer underpass to get to the GRH.”

So what’s happened? The City Council worked up the detail of a costed project, and after an initial setback (an over ambitious new bridge over the railway line) pitched the LEP in January for funds. All credit to Leader Paul James and the Council team: they were awarded £3.75 million of government funds by the LEP. The key now is to move fast and the City Council has agreed to start work now to try and complete work at both the Underpass and the Car Park road access by the end of 2020.

Of course stations are fine – but we do also need more trains. I point to our strong passenger growth (up 3.1% last year v national average of 0.4%) that reflects a growing population, meaning some services, especially to Bristol, are over full.

So I’ve had many meetings, emails and letters on this with government and train operators. The results are:

Lastly, in the photo below, you can see work well underway on my separate project, with the City Council, of an additional car park on Great Western Road. It is funded through the last GWR franchise extension, and apart from the extra parking places also creates the first ever entrance to the station from GW Road since trains started stopping there in 1844.

This is an exciting time for all of us who use the underpass, the train station and the car park(s), and this work complements the brand new Bus Station across the road (going up fast as I write). But plans and funding is one thing - we’ll be judged on how things look and work when all the work is done.

My promise is to go on being persistent – so that Gloucester gets the improvements we can be proud of.

P.S. Do let me know what other issues, like the underpass, you think would benefit residents on richard.graham.mp@parliament.uk