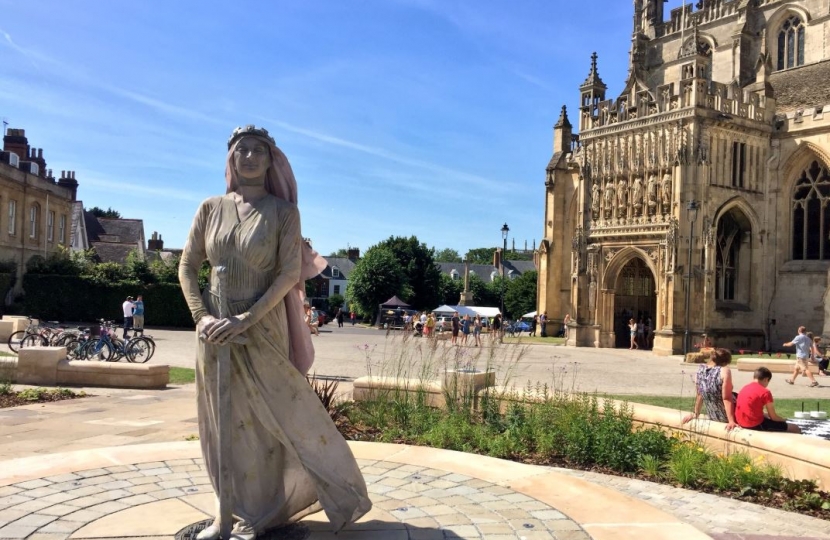 This weekend is all about a woman who died 1100 years ago. She just happened to unite most of this part of England together, defeating the Danes in Derby, seeming them off elsewhere and laying the way for her nephew to restore an independent England.

Aethelflaed was one of our greatest Queens, a heroine Queen of the Mercians (roughly all the Midlands and some of the West Country). She brought the bones of St Oswald down to Gloucester, built a Priory in his name and was buried there herself later. The ruins give a good idea of what was once there.

So I encourage everyone this evening to get a drink at the Pelican Beer Fest, cross the road to Aethelflaed’s resting place (St Oswald’s priory) & enjoy the music & atmosphere.

Then tomorrow at noon join the great Queen when she arrives back at the Docks (via the slightly more modern Sharpness-Gloucester canal) in a long boat, and is born (very slowly, with time for several put tops along the way) to St Oswald’s by 1pm.

Both these are free and unticketed events: everything ticketed or for sale (eg the three great talks at Blackfriars in Sunday and Civic Trust tours) is sold out completely.

A sell out. Who said Anglo Saxon History was boring & Gloucester had no culture? We just do it our way, which means with a lot of City Crier Alan Myatt. Talking of which..