An MP needs to earn the support of his or her constituency community. We have to lead on dealing with major challenges like a pandemic, or when things go badly wrong in different ways, speak for our constituencies in Parliament and bring partners for solutions to solve issues - like regeneration, crime, rough sleepers, investment, events and bids, infrastructure and health services.

I’ve always loved every bit of our city, its different personalities and wards, our challenges as much as our successes – and have never stopped believing that we should be proud of what we have and what we are as a city - while working ceaselessly to improve the bits that we know should and can be better. Over the last 11 years we’ve come a long way together. 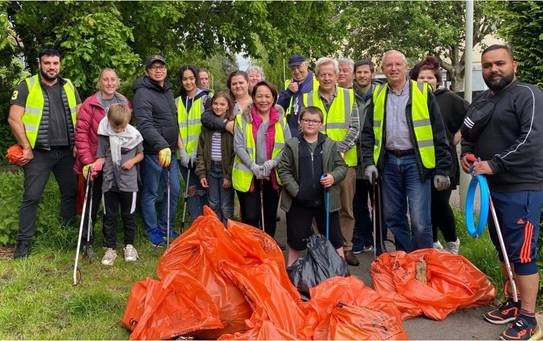 All politics starts with community and belonging

And there’s a wider point here. Democracies only work at their best when everyone feels they belong to a constituency community and want to have a say – on issues from plans for new homes or new schools, the future (for example) of Debenhams, the homecoming of Gloucester City Club, our plans for home made green energy or bringing down crime and drugs. You want to be able either to endorse or overturn your rep: to continue in a similar direction or have a change of direction.

I think that’s particularly true in an historic cathedral city with a proud past, an exciting present and an ambitious future. Anyone who lives in our city but cannot have a say in who their rep is risks being de-connected, and is less motivated to vote – and that’s bad for democracy, which only works when lots of people get inspired to participate. If voting is either below or above lots of residents then democracy is in trouble.

So I was sorry in 2007, when I was a candidate, that the Boundaries Commission and Parliament had already decided (in 2006) that the city had too many voters and that Longlevens – many of whose residents live within a mile of the Cathedral - were told they had to vote for an MP for Tewkesbury. It broke the link between city council and constituency boundaries, and I still (13 years later) get about 20 e mails a week from Longlevens residents who assume I’m their MP, because (after all) they live in Gloucester.

In 2011 the Commission tried to tackle the same issue of numbers of voters by trying to beef up the numbers in the Forest of Dean and recommended all of Westgate residents vote for an MP in the Forest of Dean constituency. I called that ‘bonkers’, led a city protest march and came up with a well researched alternative. We won the argument and the Commission changed their plan - but the proposals were never voted through Parliament.

So here we are again trying to tackle the same problem – trying to equalise the size of different constituencies, which means reducing the (increased) number of voters in Gloucester. The same is roughly true in Cheltenham, and the county as a whole has half a constituency too many voters.

It was therefore almost inevitable that whatever the Boundary Commission suggests was not going to be good news for me, because I don’t want want to see any other part of the city be outside my constituency.

However now we have the first proposals for the 2023 Boundary Review, let me share them as simply as possible, offer some initial thoughts and suggest how we (as a city) reacts during the first consultation period (which lasts until early August) – and above all to invite you to let me know your thoughts.

What’s the background to all this?
The government wants to end current anomalies that have constituencies of wildly differing sizes (between 50,000 and 90,000 voters, is the rough span). So the starting point is that each constituency (except for two islands) should have between 69,724 - 77,062 voters

What has the Boundary Commission suggested?
That because both Gloucestershire and Wiltshire each have half an extra constituency of voters that one new constituency be created along the Glos-Wilts border called Cirencester and North Wilts.  Every other suggestion for the county comes from that crucial proposal. As a result the existing Cotswolds seat would need more voters (from Tewkesbury and Stroud), while the Fof D stays unchanged (within the band now, its population having expanded). Crucially residents of one ward in Cheltenham and two in Gloucester (Barnwood and Elmbridge) would vote in the Tewkesbury constituency (local elections are unaffected in all these wards)

What do you think about this?
Desperately sorry for many reasons – basically 13 years of working with constituents in both Barnwood and Elmbridge individually, or in community groups, charities, businesses, schools, churches and on lots of issues including floods, cycleways, care homes, playgrounds and sports pitches. I worry that the knock on impact would be very frustrating for constituents in Barnwood and Elmbridge (both historically such a strong part of Gloucester).

Were any other solutions considered?
The Commission did consider two other options:

2. Constituents in Kingsholm & Wotton (rather than Barnwood) voting for an MP in Tewkesbury. It decided  too much of the infrastructure of the city was in K&W ward (eg railway station, rugby stadium, hospital) which made it inseparable from the Gloucester constituency (I agree, although slightly different arguments can be made for Barnwood and Elmbridge too)

You can see the full proposals, and the arguments for their proposals for Gloucestershire (and the rest of the South West) here: https://www.bcereviews.org.uk/node/6489

Have you spoken to other MPs about this?
Yes I met with other Gloucestershire MPs earlier this week to discuss the proposals. Like me they have concerns about what the changes mean for communities (pretty unlikely that Hardwicke feels part of the Cotswolds, for example). We all recognise that coming up with an alternative design for the county won’t be easy, and would also have a knock on impact elsewhere.

What’s the next step?
I want to hear what you think about the changes, and particularly what constituents in Barnwood and Elmbridge think of voting for an MP for Tewkesbury: and whether you have alternative ideas.

So I invite all constituents to reply to the consultation (on the link above) and copy me with your thoughts (richard.graham.mp@parliament.uk) as soon as possible.

I’ll read and consider everything, consult with boundary experts and then update you on what I believe is the right way forward, before submitting a formal response to the consultation.

Is there the opportunity to suggest alternatives?
Yes, definitely – like last time this is a long journey (likely to be completed in the Summer of 2023) - this is very much the first stage.

What do the proposed changes look like?
This is the map of the constituency as it currently is (dark blue) overlayed with the map as it would be (ie minus the red coloured parts of Elmbridge and Barnwood) if these proposals were implemented  accepted. You can see clearly how close part of both wards are to our city centre:

So thank you in advance for helping me to gauge reactions to the Boundary Commission proposals.

Richard Graham is looking for his next apprentice

I'm looking for my next apprentice! It's a wonderful role with a Level 3 Business admin qualification to achieve, and masses of experience to be gained in a small and friendly office.